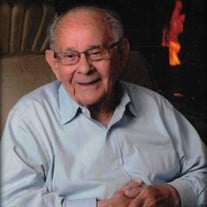 Morris (Moshe/Moses) Wall, 100 years old, went to be with the Lord on March 20, 2022. He was born to Berl (Ben) and Suze (Ida Sarah) Wall on July 14, 1921, in Dallas, Texas. On September 8, 1942, he married Gladys Mozelle Youngblood and later had two children, Dianne Loeb Randolph and Dennis Ray Wall. He served in World War II handling ammunitions, bombs, and explosives, and was stationed in Tinian and Saipan among other places. He received the American Campaign Medal and the Victory World War II Medal, among others. For many years, he was a member of Royal Haven Baptist Church. He was a loving dad, grandfather, great-grandfather, great-great- grandfather, and friend to many. He was full of life even in his last years and brought joy to those around him. He was preceded in death by his parents, Berl (Ben) and Suze (Ida Sarah) Wall; brothers, Aaron, Harry, Jacob (Jake), and Joseph Mitchell; his sister, Rosa (Rose) Wall-Delaney; his wife, Gladys Mozelle Youngblood; his daughter, Dianne Loeb Randolph; and his son in-law, Marvin Loeb. He is survived by his sister, Mollie Wall McKay Cannaday; his son, Dennis Wall and his wife Tonya; his grandchildren, Allison Randolph and her husband Aric, Laura Hill and her husband Dirk, Dionne Wilson and her husband Tom, Trent Wall and his wife Rosalyn; and his son in-law, Charles Randolph. He is also survived by 12 great grandchildren and 1 great-great grandchild. In lieu of flowers, please consider giving a donation to the International Mission Board (IMB) to support their work in Ukraine. https://www.imb.org/ukraine

The family of Morris Wall created this Life Tributes page to make it easy to share your memories.

Send flowers to the Wall family.