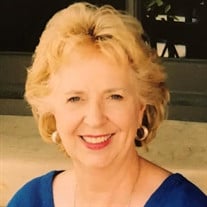 In His perfect timing, God called upon his angels to escort Nan Carole Sadler Griffith to her heavenly home on November 28, 2020. Nan entered this world on April 12, 1941, to loving parents Bernis and Myrtie Sadler, in Huntsville, Texas. Nan had a carefree, childhood in Port Arthur, where at a young age, Nan accepted Christ as her Savior. Nan graduated from Thomas Jefferson High School in 1959, where she was actively involved in student government, voted “Most Popular,” and attended Girls State in Austin. She received a degree from Lamar University where she delighted in frat parties, Alpha Delta Pi sorority sisters and new friends. Nan met her husband, Jim, at one of these parties. Nan and Jim began their life together in Houston, where Nan taught Kindergarten. The following year they moved to Fort Worth, where she taught Home Economics until their first daughter was born. Nan began volunteering at the Fort Worth Children’s Museum School, with her sorority alumni group, and taught Youth Sunday School. NASA called Jim to Houston, so off they went to League City where their second daughter was born. In 1969, Jim received a call to join a young company called EDS. Three weeks after Nan and Jim arrived in Dallas, a third daughter arrived to complete their family. A two-year assignment for EDS in Germany brought her the warmest memories of time with her family and with Jim, who passed in 1992. Nan completed a master’s degree in Marriage and Family Issues at Texas Women’s University while raising her three girls and teaching. She taught Home Economics for nearly 30 years in Plano. Nan had an extraordinary impact on the lives of kids now scattered around the globe. She was a refuge for her students, providing them with life skills, unconditional love and acceptance during their toughest adolescent years. Nan remained close to many students and celebrated their successes as they launched their careers and started their own families. Nan opened her heart wide in the service of others as a volunteer with the American Red Cross, CASA, Journey of Hope, Family Outreach, and Brookhaven Church, though her greatest service was as a loving mother and grandmother to seven grandchildren. Nan is survived by her daughters and their husbands Mabrie and Marshall Jackson, Mary and Jim Williams and Suzy and Michael Gange; her grandchildren James Jackson, Davis Williams, Mitchell Jackson, Katherine Williams, Emily Williams, Andrew Gange and Will Gange; her sisters Marlene Burleson and Shirley Sadler; brothers-in-laws David Griffith and Kerry Burleson; many nieces, nephews and friends that loved her dearly; and her furry companion, Lucy. Services will be held Thursday, December 3, at 11:00 a.m., at Brookhaven Church, 6101 Stacy Road in McKinney, and streaming online at https://boxcast.tv/view/celebrating-the-life-of-nan-griffith-871415 Pastor Glenn Meredith is officiating. In addition to her grandsons, Nan’s former students, Justin Nichols and Cam McCall, will serve as pallbearers. In lieu of flowers, donations may be made to Collin County Children’s Advocacy Center.

In His perfect timing, God called upon his angels to escort Nan Carole Sadler Griffith to her heavenly home on November 28, 2020. Nan entered this world on April 12, 1941, to loving parents Bernis and Myrtie Sadler, in Huntsville, Texas. Nan... View Obituary & Service Information

The family of Nan Carole Griffith created this Life Tributes page to make it easy to share your memories.

In His perfect timing, God called upon his angels to escort Nan...

Send flowers to the Griffith family.