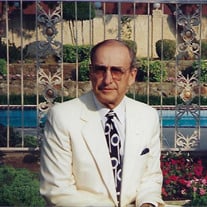 Nicholas Nadolsky, of Garland, Texas, was born in Istanbul, Turkey on October 24, 1933, and reposed in the Lord on March 10, 2022. He is survived by his three daughters: Aylin Nadolsky, Tatiana Nadolsky-Ruuska, and Dina Nadolsky. He is also survived by his three grandchildren: Elsie-Ayla Ruuska, Nicholas Nadolsky Ruuska, and Alexandra Dianna Ruuska; and spouse Dianne Wilson. All who have been blessed to be a Nadolsky will remember, for all the days of our lives, what a brilliant, kind, humble, calming, diplomatic, loving, patriarch he was. Nicholas Nadolsky’s remarkable journey commenced in Istanbul, Turkey in 1933. Born to his Father, Alexander ‘Sasha’ Nadolsky, and Mother, Alexandra Tcharykow Nadolsky, Nicholas quite often referred to childhood days in Istanbul as ‘days of heaven’. He always remembered with glee the stunning landscapes of Istanbul and Bebek; having many wonderful friends, and doing lots of running through the cobbled streets of Istanbul. He recalled to his children many times, climbing its’ verdant hills, enjoying marvelous Turkish Baklava with family and best friend Lulu, and swimming in the Bosphorus sea strait. As a carefree teen, Nicholas enjoyed many hobbies such as motorcycle and race car driving, being a disc jockey for a local station, and even playing drums with a small band. He had lots of rhythm, brilliant knowledge of many music genres, and a most beautiful singing voice his family enjoyed, especially during the holidays. Throughout joyful and carefree days in Istanbul and also France, Nicholas and cherished older sister, Tatiana, both grew into adulthood having enjoyed the languages, customs, and mores of several cultures including Russian, Turkish, English, German and French. Always curious, intelligent, athletic, and resilient, Nicholas was accepted to the prestigious American Robert College of Istanbul (est. 1863) to study engineering, and also to excel in numerous athletic arenas including Fencing, Tennis, and Gymnastics. Nicholas was fortunate to have his Father, Alexander, who, after having emigrated from Russia to Turkey, became Robert College’s world-renowned Fencing and Gymnastics instructor. Alexander Nadolsky, having joined Robert College’s Fencing staff in 1925, became the leader of the first Turkish women’s Olympic fencing team. It was there that Nicholas trained to become a skilled and accomplished Fencing champion. And thus, throughout his life, Nicholas took great pride in remaining fit, and excelling in many sports including his favorites: running, tennis, golf, ping pong, swimming, diving, gymnastics, and snow/water skiing. While attending Robert College as an engineering student, Nicholas met his brilliant and beautiful wife, Ayla Atasoy Nadolsky. Ayla Nadolsky became the mother of Nicholas’s three daughters: Aylin, Tatiana, and Dina. Following conferral of a BSEE degree from Robert College in 1957, Nicholas made the life-changing decision to move to the United States with wife Ayla. Both were conferred as Fulbright Scholars, and made their way to Boulder, Colorado, where Nicholas began his Master’s studies in Electrical Engineering. Following two semesters of graduate studies, and ‘days of splendor’ riding horseback, walking long hikes, and snow skiing in stunning Colorado; fate interfered with a wonderful job opportunity for Nicholas in Garland, Texas, at Varo, Inc. Nicholas and Ayla moved to Garland, Texas, where Nicholas continued his graduate studies in EE, completing his Master’s degree in 1962. Though Nicholas was employed by Varo in entry-level capacity, he quickly advanced to management levels; instructing and guiding entry-level project engineers, and working diligently for Varo, and the U.S. to commence design of critical components. His many designs/patents were ultimately to aid and support both military and commercial applications. Having demonstrated proficiency in several languages, Nicholas was swiftly recognized as an ideal candidate for international, engineering corporate relationships worldwide for Varoatlas. Soon advancing to memberships of several international corporate boards, Nicholas continued to study and hone skills of finance, marketing, and management in order to form his own corporation in 1974: Micropac Industries, Inc. of Garland, Texas. It was there he remained as CEO and Chairman of the Board until his retirement in May, 2003. In addition to his phenomenal success with his lifetime business endeavors, Nicholas Nadolsky was active, renowned, and awarded in participation of innumerable civic organizations, charities, and leading corporations. To name only a few, Nicholas’s many roles included: Board of Directors Garland Chamber of Commerce; President of the Garland Civic Theatre Board; Board of International Trade Conference; Advisory Board, Texas Association of Business; Board of American National Bank; Garland Chamber of Commerce Tall Texan Award; and his most valued contribution, Executive Director Dallas Area Rapid Transit. To that regard, Nicholas Nadolsky’s reputation was, and will remain as a brilliant, altruistic individual having served all of the above with consistent, distinct, unshakable, and ever-resolved honesty, integrity, ethics, character, and above all, human decency to all fortunate enough to have known him. In closing, it must be written, however, that for all of the failures and successes; for all of the accomplishments and accolades; not a single one would Nicholas Nadolsky, a son, husband, and father, ever place before the importance of love and duty to his cherished, honored, and beloved family. Nicholas Nadolsky’s children and grandchildren will forever remember that his favorite tune of all time was, and shall remain Neil Diamond’s “Morningside”: “...and when he died, he left a table made of nails and pride. And with his hands he carved these words inside: ‘For My Children.’ “ Visitation will be held Saturday, April 2, 2022, at 1:00 PM at Restland Funeral Home and Cemetery. A Russian-Orthodox service for Nicholas Nadolsky will be held at 2:00 PM in the Memorial Chapel at Restland Funeral Home, located at 13005 Greenville Ave., at the intersection of Restland Road, Dallas, Texas 75243.

Nicholas Nadolsky, of Garland, Texas, was born in Istanbul, Turkey on October 24, 1933, and reposed in the Lord on March 10, 2022. He is survived by his three daughters: Aylin Nadolsky, Tatiana Nadolsky-Ruuska, and Dina Nadolsky. He is also... View Obituary & Service Information

The family of Nicholas Nadolsky created this Life Tributes page to make it easy to share your memories.

Nicholas Nadolsky, of Garland, Texas, was born in Istanbul, Turkey...

Send flowers to the Nadolsky family.