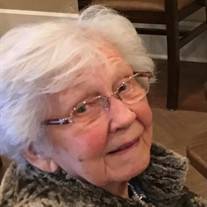 Nina Rozelle Ownbey James passed away on January 8, 2022 at The DeLaney at Lake Waco. Rozelle was born on February 24, 1924, first born to Creed and Inez (McCuistion) Ownbey. Her family, which included her sister, Janie Jo and brother Jim, lived in Itasca, Alvarado, and Godley, Texas during her younger years. Their father was a farmer and mother, a housewife. She met the love of her life during high school and married Al Gene James on March 28, 1942 in Green Cove Springs, FL, where he was stationed in the Army. Shortly after his discharge in 1945, they moved to Dallas and then to Garland in 1947, where they grew their family. They had 4 children: Nina, Joan, Ricky and Vickie who were taught by example, that first in their lives was their relationship with the Lord, second was family and then everything else follows. Rozelle found great joy being a housewife and mother while their children were young. She was an accomplished seamstress and cook, sharing these talents with her children. As their children grew, Rozelle worked outside the home as the Pastor’s secretary at Second Baptist Church in Garland and then as Financial Secretary at South Garland Baptist Church until her retirement in 1990. The family were members at each church serving in many areas and enjoying lifelong friendships. Rozelle and Al Gene had many plans for retirement; but, when he became ill, she took on the responsibility of his caregiver until his death in July 1999. Afterwards between 1999 and 2015 she was a Pink Lady volunteer at Garland Baylor Hospital, where she met many new friends and enjoyed the interaction with patients. A great joy for her and Al Gene was having their family together. The whole family has been blessed that all have been together almost every Christmas Day over the years as well as many other gatherings throughout the years. The relationships between her children and their families are a testimony to parents who demonstrated their love for the Lord, for them and each other. This is her legacy!! Rozelle is survived by daughters - Nina Townsend of Rockwall TX, Joan Alexander and son-in-law - Jim Alexander of Waco TX, son - Ricky James and daughter-in-law – Alice of Roundrock TX and daughter - Vickie King of Mansfield; 9 grandchildren, 16 great-grandchildren plus #17 expected in June and expecting her first great-great-grandson in February; her brother, Jim Ownbey and many other family members and friends. She is preceded in death by her parents, her husband, one grandson, two great-grandchildren, her sister, and two sons-in-law. Services are pending at this time. In lieu of flowers, the family ask that donations be made to the Make-A-Wish Foundation.

Nina Rozelle Ownbey James passed away on January 8, 2022 at The DeLaney at Lake Waco. Rozelle was born on February 24, 1924, first born to Creed and Inez (McCuistion) Ownbey. Her family, which included her sister, Janie Jo and brother Jim, lived... View Obituary & Service Information

The family of Nina Rozelle Ownbey James created this Life Tributes page to make it easy to share your memories.

Send flowers to the James family.