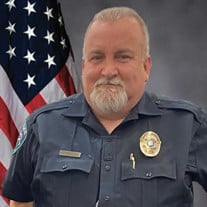 Officer Chris Allen Bardwell, age 52 of Celina, Texas, passed before his time on February 1, 2022, in Frisco, Texas. Born in Dallas, Texas on March 2, 1969, Chris was the son of Joan Kutchman (formerly Bardwell) and Jerry Bardwell. Chris spent the majority of his childhood in Pottsboro and graduated from Pottsboro High School in 1987. He knew from a very young age that he wanted to follow in his father’s footsteps and pursue a career as a police officer. Chris attended Sam Houston State University in Huntsville, while doing so he worked for the Texas Department of Corrections on Death Row from 1989-1990. Chris returned to North Texas in 1990 and began working for the Collin County Sheriff’s Office as a jailer until 1991. He was later hired by the Grand Prairie Police Department and graduated from North Central Texas Regional Police Academy in 1992. Chris would spend twenty-two and half years serving the citizens of Grand Prairie, Texas as a police officer until his retirement in 2014. Following his retirement from Grand Prairie, he accepted a position with the Celina Police Department in 2014. Chris would faithfully serve Celina until his second retirement in 2019. Retirement for Chris did not last long as he was hired by the Cross Roads Police Department in September 2021. He would serve there for just under six months until the Lord called him home. Chris loved being a public servant and hero to all, his 30 years of service are a small testament to that. Chris was well-known for being incredibly selfless, especially when it came to helping others. When not working, he loved to spend most of his time with family and friends. He loved showing off his loving wife, son, and daughter. He never missed an opportunity to support them in all activities and made sure to vocalize how proud he was of them any chance he got. Chris was also a diehard Texas Longhorn football fan. He never missed a game, even if he was forced to watch it on his police computer. Those that know Chris know that he had the ability to cheer anyone up, between giving the best advice, his quick wit, or the extremely corny jokes he was guaranteed to put a smile on your face. Chris is survived by his wife of nearly 29 years, Denise Bardwell, son, Brock Bardwell (Maddie Cadaret); daughter, Brianna Bardwell, father; Jerry Bardwell; stepfather, Buddy Kutchman; sister, Karen Bardwell; sister, Laura Bardwell-Brown (Justin Brown); sister-in-law, Christine Francis-Less (Fred Less); sister-in-law, Kim Weston; two nieces and six nephews; and numerous cousins, extended family, friends, and fellow officers with whom he served. He’s preceded in death by his mother, Joan Kutchman; uncle, Milton Bardwell (Jo Bardwell); uncle, Hubert Bardwell; paternal grandparents, Audrey and Delbert Bardwell; and maternal grandparents, Edith and Ray Wilson. The family invites friends to a visitation being held at Restland Funeral Home and Cemetery at 13005 Greenville Ave, Dallas, TX 75243 on Tuesday, February 8th, 2022, at 3:00pm. The funeral service will be held on Wednesday, February 9th, 2022, at 12:00pm located at Prestonwood Baptist Church – North Campus at 1001 W. Prosper Trail, Prosper, TX 75078. Following the funeral service, there will be a procession to Chris’ final resting place at Georgetown Cemetery in Pottsboro, TX. Celebration of Life details to follow. In lieu of flowers, donations may be made to the: · Grand Prairie Police Benevolent Association · Celina Police Officers Association · Texas Peace Officers Memorial The family also requests that any police departments in attendance bring a patch from the respective departments for the Drop a Patch box that will be located at the entrance of the church.

The family of Officer Chris Allen Bardwell created this Life Tributes page to make it easy to share your memories.

Send flowers to the Bardwell family.