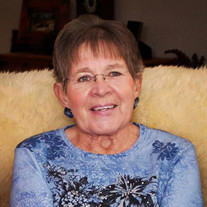 Born in Greeley, Colorado, Pat Brewer thrived outdoors. She became an avid golfer, enjoyed fishing, camping, bicycling, and travel, including annual sojourns to her cherished Rocky Mountains and the Texas gulf coast with her sister Fran, which held special meaning throughout her adult life. She was an equestrian, raising quarter horses and participating in horse shows with both daughters as girls, then with daughter Terrie as a competitor across the country in the American Quarter Horse Association circuit. Professionally, she was an x-ray technician for more than 40 years, specializing in Ear, Nose, and Throat (ENT) pathology as well as geriatrics. After relocating from Dallas to Mt. Pleasant in East Texas in the mid-1990s, Pat operated a mobile x-ray service for Southwest Mobile Imaging for more than a decade, visiting nursing home patients unable to travel to local hospitals for care. She was a favorite among the doctors and nurses who shared a wry sense of humor that helped them to build long-lasting bonds. Pat lost her husband Bunny Ray Brewer to cancer in 1996 and moved from a homestead in Mt. Pleasant to Leonard, Texas, northeast of McKinney, then to Sun City, a Dell Webb community in Georgetown north of Austin. Pat traded horses for golf in her last move, and she gained a wealth of friends. In addition to horses, Pat cared for a menagerie of animals over her lifetime, from cattle and raccoons to chinchillas, not to mention her faithful lap dogs who kept her company. Her latest pet, Gabby, a Cavalier King Charles Spaniel, is a breast cancer survivor like Pat. They were truly kindred spirits. Pat’s zeal for life manifested itself in sometimes impulsive behavior. She drove motorcycles and was known for picking up the girls from school in a dune buggy. At the age of 75, she returned home after a trip to Hawaii with friends with a tattoo of a hummingbird on her shoulder. “Is that permanent?” asked daughter Cindy. Yes. Yes, it was. Pat attended Loveland High School in Loveland, Colorado. She then earned certification at x-ray school in Dallas with longtime friend Beverly Gray. Pat and Beverly shared many fond memories that were often the subject of her anecdotes, including a trip to Cuba on one of the last voyages prior to the U.S. embargo. Of many loves in life, Pat was especially fond of Willie Nelson, Jordan Spieth, and Troy Aikman, who embodied her passions for country music, golf, and football. She was an exceptional cook, convening family over fabulous meals capped off with her incredible cakes and pies. She is survived by daughter Cindy Brewer Powell and husband Don of Dallas, daughter Terrie Brewer Booth of Dallas, grandsons Brooks Powell of Dallas, Graham Powell of Los Angeles, and Clint Ator of Dallas. Sister Fran Jeffords resides in Loveland, Colorado. A memorial service will be held Monday, April 4, 2022, at 2:00 p.m. at Wildwood Chapel within Restland Memorial Park, 13005 Greenville Ave, Dallas, Texas 75243. In lieu of flowers, please make donations in Pat’s memory to Dog Ranch Rescue (https://dogranchrescue.com/make-a-donation/) in Anna, Texas, which connected Pat and Gabby

The family of Patricia Catherine Larkin Brewer created this Life Tributes page to make it easy to share your memories.