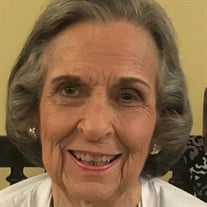 Patricia Lee Curtis Robinson was born on May 10, 1931 to Harry and Pauline Curtis in Abilene, Texas. She lived in Abilene until she met Eliot (Robby) Robinson at Dyess AFB where he piloted the B-47 in the Strategic Air Command, They moved to Dallas in 1959 when Robby left the Air Force and got a job as a pilot for Braniff International. While growing up in Abilene she was an avid dancer and ended up teaching ballet and tap dancing. She was also First Runner Up to Miss Abilene in 1950. After moving to Dallas in 1959 with Robby and their 2 children Paula and Butch, Braniff furloughed pilots and they ultimately ended up moving to Tachikawa, Japan in 1961 as Robby flew government contract for Air America through the CIA. They returned to Abilene in April of 1963 and then back to Dallas and Braniff in 1964. Pat became very active in PTA, Dallas City Council of PTA’s and the Civic League holding the office of President and other Leadership roles in both. She was awarded a Life Membership in the Texas State PTA. She was also active in their church—Christ United Methodist Church in Farmers Branch and later, Schreiber United Methodist Church in far North Dallas. Pat had a great love of animals! She had many dogs and cats over the years which we’re sure greeted her upon arrival to Heaven on March 23rd! She was especially fond of her current dog Lily and cat, Dusty, who are missing her very much! She was preceded in death by her parents Harry and Pauline Curtis, her sister, Maurine Curtis Glass, and her husband Eliot (Robby) Robinson. She leaves behind a daughter Paula Robinson McDonald (Bruce McDonald), A son Eliot (Butch) Robinson, Jr., (Joan Robinson). 5 grandchildren and their spouses Mac McDonald and Alisha, Mitch McDonald and Meghan, Brooke Robinson Horn, Eliot Robinson III and Amanda, Mark Robinson and Courtney. 11 Great Grandchildren—Kylie, Paisley, Kendyll, Erin and Meredith McDonald. Kaden and Rylan Horn. McKenna, Eli, Landry and Presley Robinson. She was also loved and will be missed by countless friends, and extended family! She loved her family and especially enjoyed family vacations to South Padre Island, a Caribbean Cruise and a couple of trips to DisneyWorld! Her family would like to thank the staff at Prestonwood Rehab Center-particularly Alicia, Arthur, Chaplain Gordon, Connie, Kaitlin, Denise and Karen for the care and love she was shown along with Archway Hospice. A special and loving “see ya later” goes out to her group of friends at Prestonwood—Her roommate Doris, Wilma, Doreen, Beverly, Peggy, Pauline, Don, and Alfred! We couldn’t have asked for a better mom, grandmother and great grandmother! One thing she always said to her kids growing up—“the world owes you nothing…you owe the world…and what a wonderful world it is!!” Funeral arrangements for Ms. Patricia Robinson have been faithfully entrusted to Restland Funeral Home and Cemetery, which is located at 13005 Greenville Ave., at the intersection of Restland Road, Dallas, Texas 75243, and can be reached at (972) 238-7111.

Patricia Lee Curtis Robinson was born on May 10, 1931 to Harry and Pauline Curtis in Abilene, Texas. She lived in Abilene until she met Eliot (Robby) Robinson at Dyess AFB where he piloted the B-47 in the Strategic Air Command, They moved... View Obituary & Service Information

The family of Patricia Lee Robinson created this Life Tributes page to make it easy to share your memories.

Send flowers to the Robinson family.