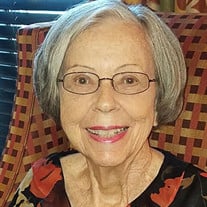 Patricia “Pat” Robuck, 93, passed away peacefully in her sleep on Wednesday, May 20, 2020 in Dallas. She had been a resident at Presbyterian Village North for the last 6 years. Born Patricia Ann Thompson on February 8th, 1927 in Newhall, Iowa, she was the daughter of Franklin and Margaret “Madge” Thompson. Her father was the public school superintendent, and he later worked many years with General Motors. In her teenage years she lived in Muncie, Indiana before moving to West LaFayette, where she attended Purdue University, pursuing Home Economics. While at Purdue, she met her husband, Mead Robuck. They were married in LaFayette on August 24, 1946. Mead’s aerospace engineering job with Chance Vought took them first to Connecticut, and then to Dallas, Texas in 1949. Dallas became the place where Pat and Mead raised their three boys; Greg, Mark, and Scott. Mead helped design the house they built in beautiful Oak Cliff, where they enjoyed family events, and hosted frequent social gatherings like Bridge Club. She was a great mother, and encouraged her boys to stay active in many activities, such as Indian Guides, Scouts, swim team, church groups, and hobbies. It was a wonderful time in their lives. Pat worked as an administrative assistant in the service industry, including many years at ServiceMaster. Throughout her seventies and eighties, her energy and looks belied her years. She worked into her seventies doing part-time sales at Crate & Barrel, where her college-aged coworkers kept her feeling spirited and young. Pat enjoyed playing puzzles and games, especially card games. For a number of years she participated in a Bridge Club in North Dallas. Pat also liked to keep her mind sharp by playing Scrabble, occasionally creating interesting words. She joined Good Shepherd Episcopal Church in North Dallas, where she enjoyed volunteering with the Pastoral Care group and making holiday baskets for elderly members. This is where she met a group of other widows. She joined a church group called “Wine and Widows”, who got together at each other’s houses every Sunday to talk about their lives and families, while enjoying a glass of wine. She always made friends easily, some of whom became lifelong friends. We are all thankful for the support that Good Shepherd provided Pat. Pat was preceded in death by her husband Mead in 1977, her sister Mary Louise, her brother Sid, and her grandson Mitchell. She is survived by her children; Greg and wife Martha, Mark and partner Debbie, Scott and wife Charlotte; grandchildren Spencer, Mead and Kelsey Robuck; and great grand-daughter Teagen Robuck, as well as nieces and nephews, and many friends. Our heartfelt gratitude goes to all the staff, attendants, and residents at Presbyterian Village. You were her dear friends and added joy to her life. A private burial will be held for immediate family. The family hopes to hold a memorial later in the year.

Patricia &#8220;Pat&#8221; Robuck, 93, passed away peacefully in her sleep on Wednesday, May 20, 2020 in Dallas. She had been a resident at Presbyterian Village North for the last 6 years. Born Patricia Ann Thompson on February 8th, 1927 in... View Obituary & Service Information

The family of Patricia Thompson Robuck created this Life Tributes page to make it easy to share your memories.

Patricia “Pat” Robuck, 93, passed away peacefully in her sleep...

Send flowers to the Robuck family.