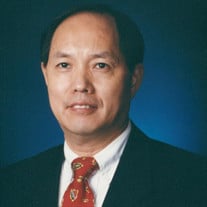 Rev Peter Wang went peacefully in his sleep to be with the Lord he loved on April 23, 2022. Peter was born in a Christian family in China on Nov 30, 1940. After he graduated from Tsinghua University with a degree in nuclear physics in Beijing, China, he started working in the development of superconducting supercollider in Shanghai. Peter arrived in the US in 1983 and joined First Baptist Church shortly after he arrived in Dallas. He found many kindred spirits and developed some lifelong friendships. Later he was ordained as a deacon at the church. He worked in a biomedical company. For his achievements, he was nominated for “Who’s Who in America” for Science and Engineering. In 1994, he answered his calling to become a minister. In 2005, he was ordained as a pastor in the First Baptist Church in Dallas. Every year, besides his pastoral duties, Peter would travel all over Asia and Europe, to preach and evangelize. During the 25 years of ministry, he had shared gospel with thousands of people, led over 350 people to the Lord, and baptized over 100. In June 2018, Peter was in an accident that caused a severe spinal cord injury and left him quadriplegic. He had put up a good fight. Through it all, he never complained or doubted God’s love and faithfulness, and praised Him always for everything until the end. Peter leaves behind his beloved wife of 56 years, Grace; his daughter, Yili and her husband, Edward, their children Andrew and Elizabeth; his son, David and his wife, Jingjing, their child, Anna; He is loved and adored by his family to whom he dedicated all his life. The Family wishes that in lieu of the flowers, gifts may be made to First Baptist Church, Dallas, Texas, memo: Peter Wang Memorial Fund." Funeral services for Mr. Peter Zhenming Wang will be held Thursday, April 28, 2022, beginning at 3:00p.m., at First Baptist Church of Dallas, 1707 St. Jacinto Street, Dallas, Texas 75201. The visitation will begin at 2:00 p.m. Funeral arrangements for Mr. Peter Zhenming Wang have been faithfully entrusted to Restland Funeral Home and Cemetery, which is located at 13005 Greenville Avenue at the intersection of Restland Road, Dallas, Texas 75243, and can be reached at (972) 238-7111.

Rev Peter Wang went peacefully in his sleep to be with the Lord he loved on April 23, 2022. Peter was born in a Christian family in China on Nov 30, 1940. After he graduated from Tsinghua University with a degree in nuclear physics in Beijing,... View Obituary & Service Information

The family of Peter Zhenming Wang created this Life Tributes page to make it easy to share your memories.

Rev Peter Wang went peacefully in his sleep to be with the Lord...

Send flowers to the Wang family.