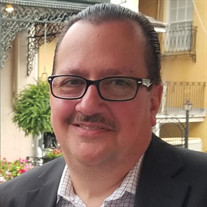 Philip E. Pappadopoulos was born December 8, 1959 in Dover NJ. He passed away on April 21, 2022 in Allen TX. Phil's greatest passions were his family, his granddaughter Katherine, and his love of the Boston Red Sox. Phil met the love of his life, Kathy, through their time in the GOYA. They were married on May 5, 1984 at St. Andrews Greek Orthodox Church in Randolph, NJ. Together they raised their son, Tim. Phil loved his family, and was dedicated to doing anything he could for them, including coaching and being involved with team sports for Tim, and going to any craft show or on any shopping trip Kathy wanted. He never missed an important event or milestone in their lives. He spent many years as an active member of his church, and was involved in several different ministries. He was a Parish Council President, GOYA youth administrator, and GOYA basketball coach. He was the current President of the AHEPA Dallas Chapter 20. The family would like to thank the entire Holy Trinity community for their care and support during this difficult time. Phil is survived by his wife Katherine, his son Timothy (Amanda), his granddaughter Katherine, and his mother-in-law Panayiota Kouyialis. He is also survived by his sister Marina (Vasilios) Staikos, his brothers-in-law Peter (Ingrid) and Nicholas Kouyialis; and his nephews Alexander, Efthimios and Odysseas Staikos; and Nicholas (Samantha), Alexander and Patrick Kouyialis. He is preceded in death by his parents, Efthimios and Anna Pappadopoulos; his father-in-law Kypros Kouyialis; and his sister-in-law Donna Kouyialis. Funeral Service Details Trisagion - Tuesday, April 26th at 7:00pm Funeral Service - Wednesday, April 27th 10:30am Viewing 11am Funeral Service Trisagion and Funeral Service at Holy Trinity Greek Orthodox Church Burial at Restland Memorial Cemetery immediately following Service can be viewed via Livestream: http://www.holytrinitydallas.org/worship-webcast In lieu of flowers, please donate to the AHEPA Dallas Chapter 20 or the Holy Trinity Greek Orhtodox Church Benevolent Fund. 13555 Hillcrest Rd. Dallas, TX 75240.

Philip E. Pappadopoulos was born December 8, 1959 in Dover NJ. He passed away on April 21, 2022 in Allen TX. Phil's greatest passions were his family, his granddaughter Katherine, and his love of the Boston Red Sox. Phil met the love of his... View Obituary & Service Information

The family of Philip E. Pappadopoulos created this Life Tributes page to make it easy to share your memories.

Send flowers to the Pappadopoulos family.