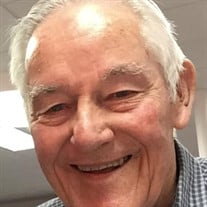 Richard Rand Lindsly (Dick), beloved husband and grandfather and retired oilman, died on Monday, May 9, 2022 at the age of 87 years. Dick was born on July 9, 1934, in Borger. The family moved to Amarillo, then to Bartlesville, Okla., where he graduated from Bartlesville High School in 1952. He attended the University of Oklahoma where he joined Phi Gamma Delta social fraternity and the engineering service organization Loyal Knights of Old Trusty. Also while at OU, he met the love of his life, Amy Maloy of Dallas. They were married on Dec. 27, 1955, and the following year Dick earned a bachelor’s degree in Petroleum Engineering. Dick worked for Phillips Petroleum Co. from 1956-1964, with two years away serving in the 25th Infantry Division of the U.S. Army in Oahu, Hawaii. He earned an MBA degree from Oklahoma City University in 1968. Dick held engineering and management positions with Ward Edinger, General American Oil Company, May Petroleum Inc. and Rosewood Resources, before working for eight years as an independent consulting engineer. He served as president of the Petroleum Engineers Club of Dallas, chairman of the Dallas chapter of S.I.P.E.S and as a member of S.P.E. and A.A.P.G. Though he retired in 1997, Dick served in a court-appointed role as a trustee of the Texas American Syndicate from 1986-2018. After retirement, Dick and Amy traveled extensively. Dick also enjoyed playing golf and participating in volunteer work with Frisco Family Services, the Senior Source and Stonebriar HOA. He and Amy moved to the Overlook at CC Young Senior Living in Dallas in 2011, where they made many friends and Dick served as president of a residents advisory board. Survivors include his wife of 66 years, Amy Maloy Lindsly, Dallas, Tex.; son Rand (Carol Moses) Lindsly, Yosemite, Calif.; daughters Dyan Maramba, Allen, Tex., and Suzanne (Chris) Fletcher, Fairview, Tenn.; brother Robert (Roberta) Lindsly, Bartlesville, Okla.; grandsons Lupe Muratalla, Jr., and Luis (Dajana) Muratalla; granddaughters Abby (Ross) Bolden, Carly Fletcher, and great-granddaughters Rebecca, Elena and Emilia Muratalla. He was preceded in death by his parents, Robert Rand Lindsly and Martha Brown Lindsly, infant daughter Dana Lynn Lindsly and son-in-law Ram Maramba. Dick never met a stranger, was known for his sly grin and hearty laugh and enjoyed demonstrating his quick math skills. He will be greatly missed. A Celebration of Life is planned for Saturday, May 28, 2022 at 10:30am in the Point Auditorium of the CC Young Senior Living Center. Funeral arrangements for Richard Rand Lindsly have been faithfully entrusted to Restland Funeral Home and Cemetery, which is located at 13005 Greenville Ave., at the intersection of Restland Road, Dallas, Texas 75243, and can be reached at (972) 238-7111.

Richard Rand Lindsly (Dick), beloved husband and grandfather and retired oilman, died on Monday, May 9, 2022 at the age of 87 years. Dick was born on July 9, 1934, in Borger. The family moved to Amarillo, then to Bartlesville, Okla., where... View Obituary & Service Information

The family of Richard Rand Lindsly created this Life Tributes page to make it easy to share your memories.