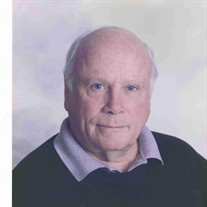 Robert L. Davis died peacefully on March 23, 2022 at the age of 94. Robert was born on March 27, 1927 in McDonald, Ohio, grew up and graduated form High School in Mineral Ridge, Ohio. He enlisted in the U.S. Navy mid-year in 1945 as a senior in high school and served in World War II. Following graduation form Brian University, he attended Dallas Theological Seminary and graduated in 1956 from the New York Seminary in Manhattan. He completed graduate studies in clinical psychology at New York University and the University of Denver. He served an internship in clinical psychology at Bethesda Psychiatric Hospital in Denver as part of a doctoral program at the University of Denver. In 1959 he was appointed Clinical Director of Bethesda Hospital under the Medical Director, Dr. Robert Moses. Mr. Davis later served as a missionary in Vietnam with the Christian and Missionary Alliance and was director of the World Relief Commission (WRC). As director of the WRC in Vietnam he developed a unique program of "Food For Work" for war victims and refugees between the U S Government and the Government of South Vietnam. In 1966 Mr. Davis was appointed by then Govenor Rhodes to be director of the Ohio Statewide Planning for Rehabilitation. The two-year study produced a seven volume report that led the state legislature to create a new independent Rehabilitation Services Commission and greatly expanded services in Ohio. Mr. Davis returned to South Vietnam in 1968 as a U.S. State Department Senior Advisor to the Minister of Health. In that capacity, he directed a study of the war time needs of Vietnamise soldiers, widows, orphans and refugees, advised on social policies and funding priorities, and directed joint USG/GVN prograns for these victims of the war. Later Mr. Davis served in Washington D.C. as Deputy Director of the Indo-China Parole Program for Refugees at the U.S. Department of State. He served in the U.S. Department of Education as Regional Commisioner Kansas City, Dallas, and in Washington D.C. as the Associate Commisioner of the Rehabilitation Services Administration. In 1977 he was assigned by the United Nations to Tehran, Iran, to develop an International Institute for Rehabilitation in developing countries. He was part of a U.S. team that studied Social Security in the Soviet Union during the 1970s. His findings were published by Columbia University Press in a document titled "Social Welfare in the Soviet Union". Robert's death is preceeded by the death of his youngest son, Brian. He is survived by his wife of 50 years, Tuyet N. Davis of Dallas, Texas, his eldest son Jonathan of Knoxville, Tennessee, Judy of Gilbert, Arizona, Marvin of Fairfax, Virginia and Stewart of Louisville, Kentucky.

Robert L. Davis died peacefully on March 23, 2022 at the age of 94. Robert was born on March 27, 1927 in McDonald, Ohio, grew up and graduated form High School in Mineral Ridge, Ohio. He enlisted in the U.S. Navy mid-year in 1945 as a senior... View Obituary & Service Information

The family of Robert Lynn Davis created this Life Tributes page to make it easy to share your memories.

Send flowers to the Davis family.