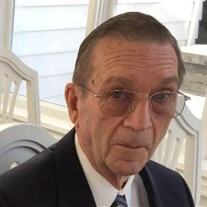 Robert Dennis “Bob” Frykholm, 85, of Garland, Texas was born November 14, 1936 in Minneapolis, Minnesota to the parents Julius Walter Edwin Frykholm and Catherine Louise O’Connell. Bob passed away on April 10, 2022. Bob was a hard working family man. He spent his entire life surrounded by his family, church community, work and hobbies. Bob married the love of his life, Karen Wood, on June 28, 1958 and cherished each other for 63 years. They started their lives together in Hopkins, Minnesota, and eventually moved to Richardson, Texas in 1993. They left the cold weather, mosquitoes and lakes behind for a new adventure together. Bob was the father to Scott (Carey), Steven (Paula) and Sheryl. He was the proud grandfather to Mitchell Fourrier, Cheryl Kim, Jacob Frykolm, Katherine Mars, Samuel Frykholm and Kara Schmitz. You could always find him supporting his grandchildren at sporting events, dance recitals, school events or band concerts. His grandchildren would never hear the word, “No” from him. His legacy will live on with his great-grandchildren Landon Mars, Evelyn Kim, Bryce Kim, Johnny Fourrier, Jack Fourrier, McKinley Fourrier and Javen Shandley who will hear the cherished stories of the life of their Great Patriarch. Others that are left to cherish his memory are his brother, Donald Frykholm (Margaret), sister, Louise Scheuchl, sister-in-law, Karen Wood, brother-in-law, Billy Wood, nieces, nephews and friends. Involvement in the church was always an important part of Bob’s life. Bob’s first church home was Southtown Baptist Church in Bloomington, Minnesota. There he took on many roles through the years. He volunteered to do everything from being a janitor and lawn care provider, to repairing buses, being an usher or having the role of a Sunday school teacher. Once in Texas he began to follow his passion for singing with the Golden Airs at First Baptist Church of Richardson with his wife Karen. The sounds of the old hymns brought comfort to him at the end of his life. Bob’s entire working career was in auto parts sales. He spent his career at several Sears stores throughout the metropolitan area. He was proud of the 22 years he spent with Sears doing what he loved, spending time with cars and engines. There were many years he was rewarded for his dedication to his position as the “Top Salesperson of the year”. He left his career with many fond memories, great friends, and a ton of tools. Bob had many hobbies that kept him busy in his off time. When he wasn’t in the garage repairing someone’s car, tinkering with other small engines you could find him learning more about World War II. His favorite pastimes were building models, reading war stories, or watching the History Channel. He also was an avid fisherman and enjoyed getting away for a camping weekend with his wife. Driving the boat and baiting the hooks were always his jobs. It never mattered to him who caught the fish, just spending the quiet time on the lakes of Minnesota was enough for him. Even in his last days he would try to share his favorite Walleye fishing stories. One of the hobbies he was most proud of was his carpentry skills. He used these skills through his involvement in the mission trips to South Texas. As part of this group he would travel, for several days at a time, repairing churches and helping the parishioners. He was a true carpenter for God. Bob was a loving father, husband, grandfather and great-grandfather. He is with his Lord, no longer suffering with Parkinsons. A special thanks from the family to his home caregiver who was with him for more than two years. You were a friend as well as an awesome caregiver.. Also, a special thank you to Pathway Hospice who cared for him in his final days. You brought comfort to him and the whole family. There will be a private family only service. In lieu of flowers, please consider making a donation in Bob’s name to Parkinson Foundation or First Baptist Church, Richardson, South Texas Mission Program.

The family of Robert Dennis "Bob" Frykholm created this Life Tributes page to make it easy to share your memories.

Send flowers to the Frykholm family.