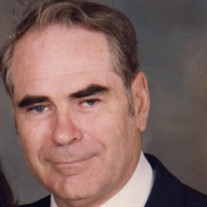 Robert Lee Johnson, age 90, passed away on Friday, January 21, 2022, in Arlington, Texas. He was born to Mr. Robert Johnson and Ms. Margaret (O'Leary) Johnson on , September 3, 1931, in Dallas, Texas. Robert leaves his loved ones with unforgettable memories and loving stories. He will be sincerely missed by his loving family, devoted friends, and all the wonderful individuals who knew and loved him Robert graduated from North Dallas High School (Bulldogs) In 1949 and received his Bachelor of Civil Engineering from Southern Methodist University. Robert received an appointment to the Naval Academy, served in the Navy and in the Air Force as a Captain in the 96th Bomb wing field maintenance. Robert Is an Eagle Scout and the recipient of many Boy Scout Leadership awards including the District Award of Merit, Distinguished Commissioner Award, and Silver Beaver Award from Circle 10 council, Boy Scouts of America. During Robert's tenure with Texas Power and Light, he designed and supervised the construction of railroads, bridges, power plants, airstrips and pollution control facilities. From Texas Power and Light, Robert transferred to and retired from Texas Utilities where Robert was responsible for the development and management of the company's water resources and the inspection of cooling water facilities. Robert Is the recipient of many Engineering awards Including the Dallas Chapter of Texas Society of Professional Engineers Engineer of the Year Award in 1993 . He was a member of the American Society of Civil Engineers and served as president of the Dallas branch from 1977-1978; Texas Society of Professional Engineers and served as director of the Dallas Chapter; Boy Scouts of America - Circle 10 Council. His hobbies were : Photography, Model building, Stamp Collecting, Scouting. He was preceded in death by parents Robert Lee and Margaret (O'Leary) Johnson, brother Gordon Kenneth Johnson He is survived by spouse Lorna Ann (Reely) Johnson, sons Michael Scott Johnson and wife Teresa Lee Johnson of Dripping Springs, TX., Mark Steven Johnson and wife Monica Jill Johnson of Colleyville, TX., grandchildren . Matthew Austin Johnson, Makenna Christine Johnson, Valentina Marie Johnson Memorials can be made to : Church of the Incarnation, Dallas, TX. Funeral arrangements for Robert Lee Johnson have been faithfully entrusted to Restland Funeral Home and Cemetery, which is located at 13005 Greenville Ave., at the intersection of Restland Road, Dallas, Texas 75243, and can be reached at (972) 238-7111.

Robert Lee Johnson, age 90, passed away on Friday, January 21, 2022, in Arlington, Texas. He was born to Mr. Robert Johnson and Ms. Margaret (O'Leary) Johnson on , September 3, 1931, in Dallas, Texas. Robert leaves his loved ones with unforgettable... View Obituary & Service Information

The family of Robert Lee Johnson created this Life Tributes page to make it easy to share your memories.