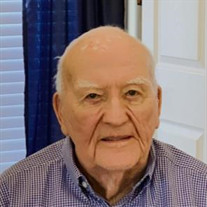 Robert Paul Jones peacefully went to be with his Lord and Savior Jesus Christ on Easter Sunday, April 17, 2022, just two days shy of his 92nd birthday. He was born in Ft Worth on April 19, 1930, to Hassye McCoy and Windsor Chambers Jones. His family moved to New Orleans in 1935. Bob graduated from Isidore Newman School in New Orleans, where he met his future wife, Nancy Herbst. Upon graduation, Bob attended Baylor University and then served in the Navy. Bob and Nancy married on Christmas Day, 1951, having only one guaranteed day off from the Navy. After serving his country during the Korean War from 1950-1953, he returned to New Orleans and graduated from Tulane. He moved his family to Memphis in 1957, where he raised his family, spent his career in retail sales, and was very active in First Baptist Church Memphis, where he served as a deacon. Bob and Nancy considered their faith the backbone of their relationship and shared their love for the Lord with their children and friends. Bob enjoyed spending time with Nancy, his four children, John Jones (Ann), Kathie Long (Dennis), Steve Jones (Lisa) and Linda Sparks, his 10 grandchildren, who affectionately know him as “Papa,” and his 19 great grandchildren. He enjoyed fishing, golf, football and visiting with friends, as well as playing bridge and dominoes. His two favorite sayings were “I love you” and “What’s for dinner?” When they were dating, Bob and Nancy would throw a penny in the Mississippi River at the end of each date and make a wish. Nancy’s wish came true when she got to spend 70 years married to him. She was by his side when he passed. Bob is survived by his wife, his children, grandchildren and great grandchildren, and preceded in death by his parents and two brothers, Weldon and Windsor H. A memorial service is not immediately planned. The family will notify loved ones when a service is scheduled. The family would like to express special thanks to the staff at Presbyterian Village North and to his personal caregiver, Maria Deleon, for all of their love and care. In lieu of flowers, Bob’s wish was for gifts to be made to Guidestone: Mission Dignity or Presbyterian Village North Foundation Caring Fund.

Robert Paul Jones peacefully went to be with his Lord and Savior Jesus Christ on Easter Sunday, April 17, 2022, just two days shy of his 92nd birthday. He was born in Ft Worth on April 19, 1930, to Hassye McCoy and Windsor Chambers Jones. His... View Obituary & Service Information

The family of Robert Paul Jones created this Life Tributes page to make it easy to share your memories.

Robert Paul Jones peacefully went to be with his Lord and Savior...

Send flowers to the Jones family.