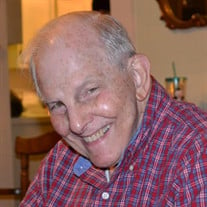 Roger Monroe Denhard, 93, of Reklaw, Texas, peacefully passed away on February 23nd, 2022, after a difficult battle with COVID-19 and Pneumonia. Roger was born on September 25th, 1928 to Elizabeth nee Sterett and Raymond Monroe Denhard in the... View Obituary & Service Information

The family of Roger Monroe Denhard created this Life Tributes page to make it easy to share your memories.

Send flowers to the Denhard family.