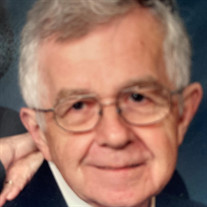 Roland Eldon Small October 2, 1929 – March 30, 2022 Roland was born in Milwaukee, Wisconsin. He attended Valparaiso University in Indiana until joining the Air Force in 1951. He met Lois, the love of his life, in Milwaukee and they married in 1955. Roland was a terminal manager for a trucking company which accounts for living in eight different states. He and Lois found that happiness is a state of mind, not a state. His varied talents led him to build homes, renovate properties, and in his spare time remodel their family home in Denton which was built in 1856. As an owner of The Chateau, a wine and cheese shoppe and later the Homestead Restaurant, Roland and Lois met many Dentonites, some who wish they were still able to enjoy their tasty offerings. Roland was involved in church, sang in church choirs, taught Sunday School, let youth groups and Bible studies. For seven years he did a Sunday morning service for the residents of Denton Rehab. Roland, I survived by his wife of 68 year, Lois; son Mark and wife Shanon of Ft. Smith, AR; daughter, Nancy Gibson (husband Ed-deceased), grandchildren, Jessica Sanguinet, Madison Sanderson, Jordan Small and great-granddaughter Piper. Roland was preceded in death by his brothers Bert, Darold, and Hil Small and his much-loved older sister Gerry, and numerous other extended family and friends. Roland’s most cherished portion of God’s word, “If God be for us, who can be against us?” carried him through his later years until he saw Jesus face-to-face.

Roland Eldon Small October 2, 1929 &#8211; March 30, 2022 Roland was born in Milwaukee, Wisconsin. He attended Valparaiso University in Indiana until joining the Air Force in 1951. He met Lois, the love of his life, in Milwaukee and they married... View Obituary & Service Information

The family of Roland Eldon Small created this Life Tributes page to make it easy to share your memories.

Send flowers to the Small family.