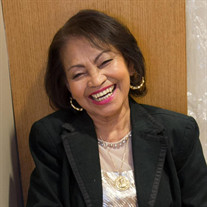 Rosalie Viñas Pickering died peacefully on Sunday, March 6, 2022 in Dallas, TX. At the time of her passing, Rosalie was surrounded by those she loved most. Her radiant spirit is carried on by her husband, three children, and six grandchildren.... View Obituary & Service Information

The family of Rosalie V. Pickering created this Life Tributes page to make it easy to share your memories.

Send flowers to the Pickering family.