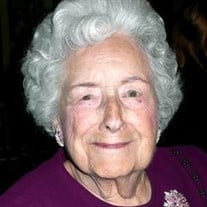 Rose Thomas, 104, formerly of Bryan, passed away peacefully early Tuesday morning, August 4, 2020 in McKinney at Belterra Health and Rehab. She enjoyed a long life lived to the fullest with a joie de vivre we will not see again. Rose was born in Shawinigan, Province of Quebec, Canada on December 12, 1915, daughter of the late Ferdinand and Mary (Poudrier) Gelinas and spent her early years in St. Elie de Caxton (Quebec). Her earliest memory occurred at the age of 3 when she watched men carry out 5 pine coffins of her neighbors. The entire family --father, mother and 3 small children-- died in the winter of 1918 during the Spanish flu which took 50 million lives worldwide. When she was 14, her family immigrated to the United States in Waterbury, Connecticut. She made friends quickly, and these soulmates, the medicine of life, were also a very important family to her that lasted all the years of their lives. Wherever Rose was, there was laughter, hearty and abundant. She loved dancing and, more than once, she danced all night. At 23, she married her great love, Gilford Thomas, and together, they successfully operated a small grocery store. Through the early years, they had five children. Two of their babies died in infancy: John Gilford Thomas in 1940 and Carol Ann Thomas in 1944. In September, 1949, the family moved to Texas, eventually settling in Bryan, where they remained for three decades, raising their family, managing their restaurants, and finally Readfield Hotel and Restaurant Supply and Readfield Meats which they later sold upon retirement. For eight years, they lived an ideal retirement with summers spent in the Laurentian mountains of Canada and winters in Lake Worth, Florida. Family, friendships, and gatherings were a mainstay throughout her life. The meals, the laughter, playing cards, traveling and cruising. In Bryan, they gathered with best friends, Evelyn and Judd Loupot more weekends and holidays than this writer can count. Their Congressman, Olin “Tiger” Teague and his lovely Freddie graced many of Rose’s tables, and if the subject turned to politics, The Rose reminded the guest that her home was a safe haven for Tiger and Freddie to relax and enjoy friendships….no politics. Rose was fiercely protective of Tiger and Freddie. When you placed the Teagues with the Loupots, it was non-stop laughter and joy. Rose loved to cook, and all loved to eat. When she attended an Aggie football game, Rose usually screamed herself hoarse and couldn’t speak for two days. Whatever it was, it was done with great enthusiasm and passion. All the days, all the hours in between, Rose celebrated her life, its seasons and holidays and ceremonies with the people she loved. Rose had an enormous faith and was a devout Catholic and Christian. No one can explain the miracles several of us witnessed, but she definitely inspired many with their own faiths. Over her long lifetime, Rose buried all of her dearest, closest friends, her parents, most of her siblings and cousins. Other family members who pre-deceased her are her beloved husband, Gilford Lawrence Thomas and a daughter, Barbara Thomas Blue who died on Valentines Day, 2020. Rose is survived by a daughter, Gene Thomas Self (Ryan) of Shreveport, Louisiana and a son, Gilford Thomas, Jr (Ruth) of Carrollton; a sister, Marguerite “Margie” (Gelinas) Bearden of Winter Haven, Florida. There are others she has regarded as family and loved as her own: Ann Loupot Daughety of Austin; Karen “Missy” Stockton Cavicchia and husband, Thomas, now deceased, of Springfield, Missouri; Janine “Alice” Cavicchia of Wonderland and Tommy Thomas of Bryan. When their first grandchild was born in 1964, Rose went into orbit and never fully returned to Earth. The world of grandchildren is special indeed and Rose’s passionate spirit soared as each was born. Rose’s GRANDS: Suzanne Thomas O’Brien (Pablo) of San Carlos, California, Amy Thomas Baker (Joe) of Plano, Shawn Blue (Traci) of Waco, Amanda Rose Self of Rockville, Maryland, Deanna Myers-Thomas of Richardson and Susan Myers-Thomas Pejovich (Philip) of Ft. Worth. Rose’s GRANDS produced nine great-grands and one great-great grand. It’s been noted that we have no control over the cards that are dealt us, that it’s how we play them that matters. When all is said and done, The Rose is, without a doubt, the highest card our family was dealt. Graveside services for Rose Thomas will be held at Restland in Dallas at 10:30 on Saturday, August 15, 2020.

Rose Thomas, 104, formerly of Bryan, passed away peacefully early Tuesday morning, August 4, 2020 in McKinney at Belterra Health and Rehab. She enjoyed a long life lived to the fullest with a joie de vivre we will not see again. Rose was... View Obituary & Service Information

The family of Rose Marie Thomas created this Life Tributes page to make it easy to share your memories.

Send flowers to the Thomas family.