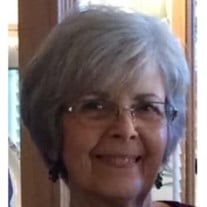 Sue Ann (Walling) Arledge, 80, of Mt. Pleasant died Sunday, January 16, 2022 at Lakeshore Assisted Living in Rockwall, Texas. Born May 20, 1941in Pittsburg, Texas to Viva and Lindsey Walling. As a young child, Sue lived in Saltillo, Texas. Her father took a job which moved the family to Kilgore, Texas. After yet another move to Pasadena, Texas, Sue spent her school years in Pasadena. In high school, she was the editor of the school newspaper "The Beacon" and voted F.F.A. Sweetheart for school year 1957-58. She graduated from Pasadena High School in 1959. During her college career she attended Trinity University in San Antonio, Texas and completed her studies at North Texas University where she graduated with a Bachelors Degree in Education. Her teaching career began at Janie Stark Elementary in Carrollton-Farmers Branch I.S.D., teaching first grade where she met and married the love of her life, Jim on August 14, 1968. She continued teaching for 7 years when she decided to work alongside her husband at his veterinary hospital. Sue was a devoted animal lover and cared for many sick and injured animals. She loved animals as much as she cherished and loved her former students and her own children. After a move back to East Texas in the early 80's, she returned to the classroom, teaching first and second grade in addition to being the art teacher for the school. She retired from the teaching profession in 2002 from Hubbard I.S.D. Sue had so many wonderful talents. She loved to cook, sew, garden and paint. Cooking was her passion and she loved to cook for her family as well as her church family. Her beautiful paintings won many ribbons and awards at various art contests. Continuing to give back to her community, she served as a poll election volunteer and election judge in Bowie County. She is survived by her loving husband of 53 years, Jim Arledge, of Mt. Pleasant, Texas. She is also survived by her 4 children: Kathie (Arledge) Johnson and husband Tim of Carrollton, Cindy (Arledge) Short and husband David of Rockwall, Jeff Arledge and wife Debbie of Richardson, James Arledge and wife Jennifer of Mt. Pleasant, her sister Betty (Walling) Ek of Wickenburg, AZ., brother-in-law Bob Arledge of Broken Arrow, OK. Grandchildren are: Jason Arledge, Austin Arledge and wife Taylor, Whitney Westbrook and husband Aaron, Lindsey Gaddis and husband Kory, Tyler Johnson, Makenzie Arledge and Ellie Wooten; great grandchildren, Haley Arledge, Guage Arledge, Madison Arledge, Gage Westbrook, Grayson Westbrook, Gentry Westbrook, Graham Westbrook, Ayden Arledge, Ainsley Arledge and Emma Gaddis, niece Pam Webster and nephews Kent Ek, Randy Ek, Philip Strawther, David Arledge and Steven Arledge. She will be dearly missed by many colleagues, extended family members and friends. We love you Sue Baby!! Graveside Service for Sue Ann (Walling) Arledge will be Tuesday, February 15, 2022 at 1:00 PM at Restland Funeral Home. Funeral arrangements for Sue Ann (Walling) Arledge have been faithfully entrusted to Restland Funeral Home and Cemetery, which is located at 13005 Greenville Ave., at the intersection of Restland Road, Dallas, Texas 75243, and can be reached at (972) 238-7111.

The family of Sue Ann(Walling) Arledge created this Life Tributes page to make it easy to share your memories.

Send flowers to the Arledge family.