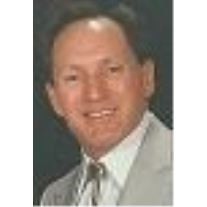 DORSEY, TED EARL Age 78, passed away on April 24, 2008. Visitation will be 6:00-8:00 PM, Tuesday, April 29, 2008 at Restland Funeral Home. Services will be at the Restland Memorial Chapel 12:30 PM, April 30, 2008 and entombment will be in the Restland Abbey Mausoleum. Born April 24, 1930 to parents Oliver Mitchell and Callie Donna Dorsey in Wichita Falls, Texas. He is survived by his loving wife, Karren Dorsey of 38 years; daughter-in-law, Linda Dorsey; nieces, Janet Beasley; Terri Casino, of Lake Jackson, TX; Toni Harrison of Mansfield, TX; Donna Moore of Missouri City, TX; nephews, Mitchell and Patrick Dorsey of Lake Jackson, TX. His son, Mark Dorsey, his parents, brothers, Charles Grover Dorsey, Mitchell Blair Dorsey and Billy Joe Dorsey preceded him in death. He resided at Eagles Nest Estates an Aviation Residential Community in retirement after 30 years with Pitney Bowes, Inc. serving as Branch Service Manager and Region Engineer. He was a veteran of the United States Marine Corp during WWII serving in the USMC Aerial Photographic Squadron VMD 254 and received an Honorable Discharge in 1948. Before joining Pitney Bowes, Inc., Ted served with the Burlington Railway Co. for 13 years and after retiring from Pitney Bowes has enjoyed life as a private pilot in his retirement. He was a member of the Angel Flight of America and was very proud of his voluntary flights to assist those in need of medical transportation. He was awarded recognition for his services in 1997 when he flew 20 missions for a total of 60 hours and 7,660 miles to transport patients to and from distant Hospitals for their medical treatment. He was also a member of the Beechcraft Bonanza Team that set a National Aeronautic Association World Record of the largest general aviation formation flight of 132 Beechcraft aircraft on July 25, 1995 from Rockford, IL to Oshkosh, WI. He has been active the past 12 years in the restoration of a World War Two 1942 Vultee Basic Trainer Aircraft which was used in the early years of WWII to train Americas Fighter Pilots. To help carry on Ted’s work, memorials may be made to the Angel Flight, 4310 Wiley Post Road, Addison, TX 75001-4292. For more information, The Angel Flight website is www.angelflightsc.org.

The family of Ted Earl Dorsey created this Life Tributes page to make it easy to share your memories.