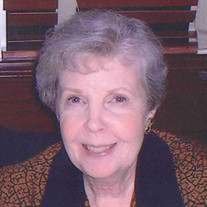 Teresa Ensley Terrell, born August 2, 1930 in Oklahoma City, Oklahoma to parents Paul H Ensley and Mary Conroy Ensley. Teresa was the third of five children, with two older sisters, Pauline and Ruth, two youngers brothers, Thomas and James Ensley. She graduated from John Carroll High School in Oklahoma City where she was a cheerleader for the school and then, after graduation, became an X-Ray Technician at Saint Anthony's Hospital. Later Teresa flew with Trans World Airways (TWA) as a hostess, along with her sister Pauline and Ruth. Having first met at high school in 1945, Teresa married her best friend, Richard Terrell, in 1956 at Our Lady's Cathedral in Oklahoma City. Through 65 years of marriage, they were blessed with five children; Richard Jr, Christopher, Timothy (HPF), Ann and Thomas. Teresa was a person of great empathy who had a particular fondness for the elderly. Early in her married life while living in Houston, Texas and with four young children, she selflessly took it upon herself to make sure the ladies at the Clarewood Retirement Home had rides to Sunday Mass if they were unable to attend Mass on their own. Later, while in Richardson, Texas, Teresa again took it upon herself to make sure the elderly at Crestview Nursing Home were not forgotten during the holiday season. Many times Teresa invited those who would be alone during the holidays into the family home to enjoy her home cooked family meals via an extravagant production that resulted in a delicious five-course meal. Teresa even made sure each guest went back to the nursing home with a personal gift to remember the event. All those who witnessed Teresa's acts of charity have never forgotten them, even to this day. Passionate volunteer, she worked countless hours with White Rose Women's Center of Dallas as a counselor. Where her efforts were much appreciated. An accomplished artist of many mediums and whose work was featured at Neiman Marcus, Teresa's art brought joy and happiness to all those she shared her gift with. She was adept with oil on canvas and crewel works. Teresa never met a surface that she could not enhance with her artistic beauty, turning ordinary objects like light bulbs, wine bottles, kitchen backsplash tiles, shoes, clothing, kitchen tables, egg shells, and walking canes into works of art with her creative use of oils, acrylics, stencils, lacquers, and coloring pencils. Particularly prized were Teresa's artistically creative handcrafted stationary in which she kept family and friends in touch with the Terrell family throughout the years. Teresa is preceded in death by her parents and much loved sisters Ruth McFarland and Pauline Marshall. Teresa is survived by husband Richard, son Richard Terrell Jr. (Dianne) of Dayton, Ohio; son Christopher Terrell (Thelma) of Allen, Texas; son Timothy Terrell (Stephanie) of Frisco, Texas; daughter Ann Deery (David) of Allen, Texas; son Thomas Terrell of Frisco, Texas as well as by 14 grandchildren and 4 great grandchildren - all dearly loved. Teresa attended the Traditional Roman Catholic Mass at Mater Dei parish in Irving, Texas. The family would like to acknowledge the tremendous hospice support provided by TT and Rene of Visiting Nurse Association as well in home health care providers Leslie, Cassandra, and Kitty for their friendship, loving, care, and kindness during the last 16 months of Teresa's life. Without these ladies' support, the family could not have cared for Teresa as they did. Those desiring to attend services for Teresa can attend any or all events, depending on each person's individual choice. In lieu of flowers please consider making a donation in Teresa's name to one of the following organizations: White Rose Women's Center 4313 North Central Expressway Dallas, Texas 75205 or Discalced Carmelite Nuns 600 Flowers Ave Dallas, Texas 75211 May the souls of the faithful departed, through the mercy of God, rest in peace. Amen.

The family of Teresa Ann Ensley Terrell created this Life Tributes page to make it easy to share your memories.