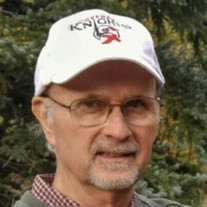 My husband, Tommy, took his last breath on this earth on Sunday, January 23, 2022. 12 years of Parkinson's and then Aspiration Pneumonia wore out his body. But we know he trusted in Jesus for forgiveness of his sins, so we grieve, but not without hope!. We will see him again! Tommy was born on July 28, 1949 in Jackson, Mississippi to John Alva Collins and Wilma White Collins. He was blessed to grow up in the small town of Ridgeland, Mississippi. From 1967 to 1971, he lived in Starkville, Mississippi. While attending Mississippi State University. After graduation he joined Campus Crusade for Christ; and served at Georgia Southern, University of Georgia and Auburn University from 1971 to 1976. Tommy and Debbie met at UGA in 1972, and married June 1, 1974. Moving to Texas in 1977, where Tommy worked in several different fields. This quiet, man of few words become a Auctioneer and sold many antiques! He sold used cars; managed the distribution center for Becket Publications; sold Long Term Care Insurance; and was an Office Manager in a Northwestern Mutual Life Agency. Tommy was a natural handyman and loved to tinker in his garage and work in the yard. He was a resident of Carrollton for 29 years before relocating to Richardson in 2006. Tommy's great love was his service in our local church, Community Bible Chapel. He served as a Deacon, on the Benevolent Committee and as a small group leader. He encouraged others in their ministries and mentored all of us in the area of worship. He was a student of the word of God and taught many bible studies. He was also a man of faithful, beautiful prayers. Tommy is preceded in death by his parents; his father, John Alva Collins, in 1980; his mother, Wilma White Collins, in 2015; and his brother, John M. Collins in 2021. He is survived by his wife of 47 1/2 years, Debbie Collins of Richardson, Texas; daughter, Christie (Travis) Carlson of Timnath, Colorado; son, Jachin (Mindy) Collins of Dallas, Texas; and son, Caleb (Mandy) of Italy, Texas. Also to cherish his memory are 10 grandchildren: Austen, Kaitlin, Lily, Sadie, Morgan, Landon, Ryder, Logan, Caylee and Brynlee. Tommy is also survived by; sister-in-law, Linda Collins of Tupelo, Mississippi; niece, Brittany (Joe) Johnson of Beldon, Mississippi; nephew Chanse Collins of Tupelo, Mississippi; nephew John B. (Shelby) Collins of Surprise, Arizona; niece, Erica (Toby) Handley of Fayetteville, Georgia; nephews Nathan Wooddy of Ft. Lauderdale, Florida and Collin (Lindsey) Wooddy of Sharpsburgs, Georgia; great nieces and nephews: Addison, Rivers, Raegan, Chandler, Tucker, Embry and Juliet. Cousins, Judy Swanberg of Laurel, Mississippi and Ruth (Dwight) Hastings of North Carolina. The graveside service will be held on Friday, February 25, 2022 at 3:00pm in the Garden of Trinity located at Restland Memorial Park - 13005 Greenville Ave., Dallas, Texas 75243. The Memorial Service will be held the following day, Saturday, February 26, 2022 at 11:00am at Community Bible Chapel - 418 Main St, Richardson, Texas 75081. The Memorial Service will be available for viewing via the CBC U-Tube site. In lieu of flowers please consider donating to one of the following organizations: Community Bible Chapel; Truth for Life Ministries - Cleveland, Ohio; Navigators; Parkinson's Voice Project - Richardson, Texas

My husband, Tommy, took his last breath on this earth on Sunday, January 23, 2022. 12 years of Parkinson's and then Aspiration Pneumonia wore out his body. But we know he trusted in Jesus for forgiveness of his sins, so we grieve, but not without... View Obituary & Service Information

The family of Thomas White Collins created this Life Tributes page to make it easy to share your memories.

My husband, Tommy, took his last breath on this earth on Sunday,...

Send flowers to the Collins family.