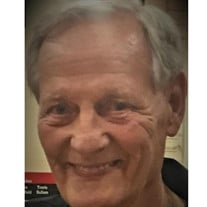 Thomas Earl Patty, Jr., 80, of Weatherford, Texas passed away Tuesday, March 22, 2022, at Medical City North Hills Hospital, North Richland Hills, TX in the presence of his loving children. Tom was born June 2, 1941, in Post, Texas as the first born to Thomas Earl Patty, Sr. and Audrey Nell (Reno) Patty. Tom was a 1959 graduate of Carlsbad High School in Carlsbad, New Mexico, where he was an All-American high school basketball and four-sport All-State athlete. He continued his basketball career playing 4 years from 1959 to 1964 for the Texas Tech Red Raiders, in Lubbock, Texas, being a key contributor to two Red Raider Southwest Conference Championship teams which both advanced to the Sweet Sixteen during the 1960-61 and 1961-62 seasons. He earned All Southwest Conference MVP in 1964. After graduating from Texas Tech in 1964, Tom went on to play for the semi-pro Phillips 66er’s in the MIBL League while training for corporate work with Phillips 66. Tom was a natural salesperson, being able to connect with people of all backgrounds. He spent many years as a successful sporting goods salesman and later founded Breakaway International in 1990 where he worked until retirement. Of all of Tom’s accomplishments, his family is his most valued. He was an incredibly devoted dad and “Papa Tom” to his four children and 8 grandchildren. He loved his large family and was loved by them. Tom was a constant presence, dependable, quietly driven and incredibly humble. He impacted all who knew him; cultivated new friendships and maintained lifelong friendships throughout his life. He enjoyed spending time with family, attending Texas Tech and Phillips 66 reunions and golf. Tom being the oldest sibling of a large and loving family, was looked to for strength and stability. He is survived by his four children: Craig Patty of Fort Worth, Texas; Robin Castellon-Patty and husband Miguel of Hurst, Texas; Kamla Patty of Dallas, Texas; and Krisla Patty Cadenhead and husband Chad of Dallas, Texas; his grandchildren: Alex Castellon-Patty and wife Alexa, Sydney Castellon-Patty, Maclane Cadenhead, Campbell Cadenhead, Cooper Cadenhead, Emma Patty, Abby Patty and Noah Patty. He is also survived by two brothers, David Lee Patty, Sr. and wife Suzanne of Paris, Texas and Kim Alan Patty and wife Cherene of Edmond, Oklahoma, and a host of nieces, nephews, great-nieces and great-nephews who adored him. Tom was preceded in death by his parents, Tom Patty Sr. and Audrey Nell Patty, his sisters, Nita Jo Bass and Kathy Jean Kiser and by his brothers Homa Len Patty, Terry Don Patty and Richard Patty. Memorial Services will be held on Saturday, April 9 at 11:30 am at Lake Highlands United Methodist Church, 9015 Plano Road, Dallas, Texas 75238. A small graveside service for the family will precede the Memorial Service at Restland Funeral Home in Dallas, Texas. Funeral arrangements for Thomas Earl Patty, Jr. have been faithfully entrusted to Restland Funeral Home and Cemetery, which is located at 13005 Greenville Ave., at the intersection of Restland Road, Dallas, Texas 75243, and can be reached at (972) 238-7111.

The family of Thomas Earl Patty Jr. created this Life Tributes page to make it easy to share your memories.

Send flowers to the Patty family.