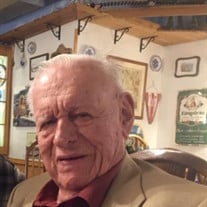 The Fauser family has lost two of their most outspoken and iconic members: our father, Walter B. Fauser, Jr., 95, and our brother Christopher Jon Fauser, 68. Walter Bernard (Bernie), was born in 1925, in Detroit, Michigan and died in Dallas, Texas in June 2021. He served in the Navy Flight Training program toward the end of World War II. Following graduation with a master’s degree from the University of Michigan, Bernie began a challenging career as a geophysicist with the Mobil Oil Company. After marrying Joan E. Upton in 1948, they embarked on adventures lasting over 56 years. The couple’s six children were born in the states of Michigan, Texas, Wyoming, North Dakota and Colombia, South America. In 1957, the search for oil took the family to Colombia for a span of eight years. The Fausers then moved to Dallas in 1965, however Bernie’s job took the Fauser couple on a final five-year stint to the North Sea area (The Hague). Bernie retired after 36+ years of service with Mobil Oil, but the adventures continued for Bernie and Jo, as they enjoyed many trips both domestic and abroad. Bernie was preceded in death by his beloved and resilient wife, Joan Upton Fauser (2005) and son, Christopher Jon Fauser (2020). Bernie is survived by five children: Jeff (Camille) Kent, Ohio; Jill (Rene), Irving, Texas; Mike (Tami), Coldspring, Texas; Kurt (Kathy), Keller, Texas; Eric (Zeb), Houston, Texas and a sister, Marlene Fauser Mullen of Bend, OR. He also leaves behind sixteen grandchildren, nine great-grandchildren, nieces, nephews, brother-in-law, Terry Upton of Rochester, MI, and his cousin, Alice Fauser Huitink of Williamsburg, MI. Christopher Jon, was born in Center, Texas in 1951, and died suddenly in Lynchburg, Virginia in April 2020. Services for Chris were delayed due to Covid restrictions. After schooling in Colombia and Dallas, Chris graduated from the University of Houston in 1973. His working career spanned many years in sales for numerous telecommunication companies. His final position was as a federal sales consultant for Superior Communications in Lynchburg. Chris was known to many as “Chris Quota” because of his stellar ability to meet or exceed sales quotas way before anyone else. Chris is survived by his daughter, Chapel Dee Fauser of Pittsburgh, PA, in addition to his brothers, sister, their families, numerous cousins and former wives Diana Danby (Chapel’s mother) of Pittsburgh, PA and Nancy Parker Fauser of Greenwood, ME. Private family memorial services will be held in late June 2021. Inurnment will take place at Restland Memorial Gardens in Dallas.

The Fauser family has lost two of their most outspoken and iconic members: our father, Walter B. Fauser, Jr., 95, and our brother Christopher Jon Fauser, 68. Walter Bernard (Bernie), was born in 1925, in Detroit, Michigan and died in Dallas,... View Obituary & Service Information

The family of Walter Bernard Fauser Jr. created this Life Tributes page to make it easy to share your memories.

The Fauser family has lost two of their most outspoken and iconic...

Send flowers to the Fauser family.