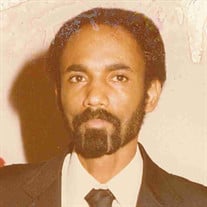 Walter “Ray” Rogers was born on July 24th, 1943 to Walter Jr. and R. Delia Rogers. Ray was born in Waco, Texas and eventually migrated to Dallas. He was employed by the Richardson Independent School District for many years and later became an employee of Raytheon for 20 years until his retirement. Ray accepted Christ at an early age and as a young adult became a member of First Baptist Church of Hamilton Park under the leadership of the late Dr. J. L. Foster. He was a dedicated member, sang in the Male Chorus, and was known to be a powerful prayer warrior. Ray was also crowned with the ministry of a deaconship and enjoyed attending church and Sunday School where he shared his love of Jesus and family. He continued as a fervent church worshipper until his health failure. In 1985 Ray met and fell in love with Dorothy who he lovingly referred to as “Baby”. Ray and Dorothy were married for 37 wonderful years. Ray took pride in his family and they loved spending time with him; enjoying his wit along with the funny nicknames he gave them. His grandchildren returned the love by naming him “Pappa Ray”. He had also enjoyed fishing and cherished times spent with his wife’s family in “Glen Mo”; the nickname he bequeathed to Glenmora, Louisiana. He showed his love in many ways. He was a loving, kind and gentle Christian, Son, brother, Father, Uncle, Grandad, Great-Grandad and friend. After a long battle with Alzheimer’s Disease, our beloved Ray departed this life February 5, 2022, at 8:10 p.m. at Garland Nursing Home and Rehabilitation. Ray is preceded in death by his father Walter Jr., mother R. Delia and brother Haverzelle. He leaves to cherish a loving and devoted wife of 37 years, Dorothy Stevens-Rogers; sister: Rose Taylor; children: Janet Pope, Terry Peterson, Diane Stevens-Ingram (Cedric), Kim Lucas (Don), Kim Giles (Eugene), Kevin Rogers (Shonda); ten grandchildren; ten great grandchildren; In-laws: Delores Shaw (Howard, Sr.), Donald Talbert (Virginia), Joseph Walker; Nieces: (Brandi), Michelle Taylor: Nephew: Shedrick Taylor, and a host of cherished relatives and friends. The visitation will be held on Thursday, March 3, 2022 from 1:00pm to 2:00pm the Memorial Chapel. The Celebration of Life service will follow at 2:00pm, also in the Memorial Chapel - 13005 Greenville Ave., Dallas, Texas 75243. Burial will take place following the service in Court of Good Shepard - Restland Memorial Park.

Walter &#8220;Ray&#8221; Rogers was born on July 24th, 1943 to Walter Jr. and R. Delia Rogers. Ray was born in Waco, Texas and eventually migrated to Dallas. He was employed by the Richardson Independent School District for many years and later... View Obituary & Service Information

The family of Walter Ray Rogers created this Life Tributes page to make it easy to share your memories.

Send flowers to the Rogers family.