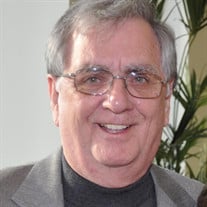 William Calvin Coleman went to be with Jesus April 6, 2022, in Dallas, Texas. He was born December 1, 1941, in Eupora, Mississippi, to William Elton Coleman and Lera Oswalt Coleman. He met and married the love of his life Carol Waite at First Baptist Church, Dallas, Texas. They were married on June 15, 1990, blessing them with 32 wonderful years together. After graduating from Eupora High School, Calvin attended Delta State University, Cleveland, Mississippi, where he studied Business Administration and Management. His education and life experiences prepared him to launch a successful career as an entrepreneur and corporate business executive. During Calvin’s years with Kroehler Furniture Manufacturing, he served as plant manager in two locations: first in Pontotoc, MS, then in Dallas, TX. Calvin later started a small business, Indoor Provisions, which he and his employees built and operated until he retired in 2000. Calvin began reading the newspaper as a child and enjoyed keeping up with current events and politics. He started every day with coffee and the newspaper. He also enjoyed football, especially college ball, and attended a number of bowl games. The best was the Rose bowl and the Rose parade. He followed many players and coaches and would often start a conversation by asking “what do you think of so and so?” before giving you his own opinion. As a matter of fact, Calvin never met a stranger and could talk with anyone. He was good at keeping in touch with family and friends, as well as, former co-workers through visits or by phone. He kept up with the all the generations of the family, remembering even their birth dates, and liked to organize family gatherings back in Mississippi. Calvin enjoyed getting together with friends for dinner and taking out of town guests to Cattlemen's and the Ft. Worth Stock Yards. He especially enjoyed travel and had been to every state in U.S. With his love of history, there were many stops for historical places. He took a number of trips to New York City to see many Broadway shows and even went on an Alaskan cruise. He also traveled internationally to London, Paris, France, Omaha Beach, Normandy, Russia, Finland, Salzburg, Linz, Vienna, Prague, Switzerland, Sweden, Germany, Denmark, Brussels, Budapest, and Australia. He will be remembered as a loving, generous, caring and compassionate person of faith. He enjoyed being a part of his church, where he loved the music, marked sermon passages, recalled past sermons easily, and often reached out to help others. Calvin was preceded in death by his parents, his brothers Sam and Don, and great-nephew Will McGregor. Survived by his wife Carol, twin sister Carolyn McGregor, nephews Allen, Phil, Mark McGregor, John Coleman, nieces Jennifer Catledge, Vicky Swords, great-nieces Haley, Sami Grace McGregor, Tiffany Coleman, great-nephews Caleb, James McGregor, Cole Catledge, Austin Swords, nephews Shawn, Steven, Scott Woodward, niece Abby Wood, nephews Ben, Andrew Waite, great-nieces Kenzie, Pippa, Grace, Amarissa, Clara, Caroline, Cate Woodward, Kinley Waite, Adley Wood, great-nephews, Caleb, Jonathan, Seth Woodward, Owen Wood, Colton Waite, as well as, aunts, uncles and numerous cousins. A memorial service will be held at the Wildwood Chapel at Restland Funeral Home on April 26, 2022 at 10am. In lieu of flowers, you can honor Calvin by giving to First Baptist Dallas, the Susan Woodward Memorial Fund, 1707 San Jacinto, Dallas, TX 75201 or a charity of your choice.

William Calvin Coleman went to be with Jesus April 6, 2022, in Dallas, Texas. He was born December 1, 1941, in Eupora, Mississippi, to William Elton Coleman and Lera Oswalt Coleman. He met and married the love of his life Carol Waite at First... View Obituary & Service Information

The family of William Calvin Coleman created this Life Tributes page to make it easy to share your memories.

Send flowers to the Coleman family.