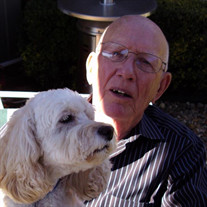 Windell Paul Moore went to be with the Lord on October 12. 2021, in Plano, Texas. He will join his loved ones in heaven as he was preceded in death by his wife of 42 years, Martha Ann Tomlin Moore, his daughter, Cheryl Lane Moore, who was killed tragically in an accident in 1972 and his most recent wife of 20 years, Dede McDonald Moore, who passed away in April of this year. Windell is survived by his daughter, Michele Moore Hernandez and husband Cruz (sons Keith and Eric), and son Steve Moore. He is also survived by his step children Paula Poole and husband Doug, Phyllis Rich and husband Mike, Brad McDonald and his wife Penny and Robert McDonald and his wife Donna. In addition he leaves many grand-children behind. Windell will also be missed by many nieces and cousins in West Texas and in Austin, as well as all over the country. Windell was born to Mr. Ernest Moore and Ms. Ruthie Stevens on Saturday, April 19, 1930, in Nolan, Texas. He grew up in Colorado City and then moved to San Francisco with his family where he graduated from Mission High School. He joined the Air Force soon after school where he served as a mechanic in Guam. Upon returning home, Windell came back to Texas and was introduced to Martha Tomlin. They married and had three children together from 1957 to 1959. Windell served in leadership positions in several churches, including decades with Lake Park Cumberland Presbyterian Church, now known as Lake Highlands Presbyterian. He has served faithfully. Windell was the ultimate salesman. He worked selling used cars, then for Micro-Chemical, then Eastman Kodak, before finally ending up at AB Dick Printing Equipment where he worked for two decades. Windell became the top salesman for the company for 17 years straight. He turned his love for graphic arts into a career as he then opened Advance Printing and Advantage Printing Equipment. Both companies were successful when he retired in his 70s. Windell loved his dogs. In this last year he often talked about how fortunate he was to have had the best dogs a person could have. His favorite was Jake who lived to be 17 but had to be put to sleep in May. He often talked about Scamp and Toulouse and dogs going back to his childhood. Windell loved the lake life. He loved to fish and, evidently, work on motor boats. He bought a couple of lake-houses on Lake Cypress Springs and built a house with Martha. After Martha died, it was at Lake Cypress Springs where he met Dede. Windell loved old cars and singing. He would often mention some of the classic cars he drove throughout his career. He never missed an auto museum when he was traveling. He refurbished a 1930 Model A Ford with Steve in the 1970s. Windell and Steve also sang together in a barbershop chorus. No matter what, music always seemed to brighten dad’s day. Visitation for Windell Moore will be at Restland Funeral Home on Friday, October 22, 2021 from 4 to 6 PM. The funeral will take place at 10:00AM Saturday, October 23, 2021 in Restland’s Abbey Chapel. Reverend Mike Weaver will officiate the service. Pall bearers are Robert McDonald, Brad McDonald, Nick Zatezalo, John Searcey and Cruz Hernandez.

Windell Paul Moore went to be with the Lord on October 12. 2021, in Plano, Texas. He will join his loved ones in heaven as he was preceded in death by his wife of 42 years, Martha Ann Tomlin Moore, his daughter, Cheryl Lane Moore, who was killed... View Obituary & Service Information

The family of Windell Paul Moore created this Life Tributes page to make it easy to share your memories.

Send flowers to the Moore family.