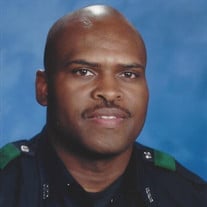 Christopher Dwayne Gibson was born to Rudolph P. and Idella W. Gibson on February 9th, 1967 in Hammond, Louisiana Chris proudly attended Southeastern Lab school from Kindergarten to 8th grade and developed lifelong friendships. He was an excellent football and baseball player breaking several records cementing his foundation of his love for sports. Chris hit many home runs at Zemurray Park in Hammond, Louisiana. He grew in his faith and was a member of Greenfield Baptist Church where he was baptized by the late Rev. Nolan Clayton. He played football at Hammond High School as defensive tackle and won a scholarship to attend The Grambling State University, following his mother’s alma mater. Chris met his wife in college and moved to Dallas, Texas to pursue a career in serving his community as a Dallas Police Officer. Chris was a community treasure and worked for the Dallas Police Department for 25 years. He was the definition of a protector and displayed this into the community, schools, and family. In addition to protecting the city of Dallas at night, Chris worked his days as a School Resource Officer (SRO) for Lake Highlands High School among an abundance of other schools within the Richardson, Plano, and Dallas area. He was loved by administration, faculty, staff, students, and community members. He was committed to providing an optimistic, safe, and orderly school environment for thousands of students and educators. If you knew Chris you felt his passion for music and would often experience him singing loudly to Earth, Wind & Fire, Stevie Wonder, and the late great Prince. Chris loved vacationing often with sand between his toes, traveling to new cities, and enjoyed watching and attending all sports games. Chris also loved to try new recipes on his off days by grilling on a nice sunny day and would maximize his time off from work by watching Sanford & Son and Andy Griffith, eating, and embracing the quiet and simple times with his loved ones. Chris was a proud New Orleans Saints fan and there was no way to persuade him otherwise. Chris was a God-fearing man, a husband, father, brother, uncle, cousin, friend, co-worker, protector, and the best mentor. He was hilarious and would without fail find a way to bring humor into any scenario. Chris was preceded in death by his parents, Rudolph and Idella Gibson as well as his loving brother Roderick Gibson. Chris leaves to cherish his memory, his devoted wife, Dana, banded by his two beautiful baby girls India and Brandi. Siblings Agathia (Tom), Keith (Jackie), Roxie, Lorraine (John), Claire (Joanne), and baby sister Vinita (Jake), Sister-in-law Cathy, and a host of nieces, nephews, cousins, relatives, and friends.

The family of Officer Christopher Dwayne Gibson created this Life Tributes page to make it easy to share your memories.

Send flowers to the Gibson family.