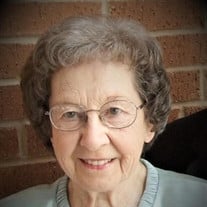 Arlene Gwenn Tovey, age 98, of Richardson, Texas passed away peacefully on Thursday morning, April 7, 2022, at Twins Rivers Assisted Living & Memory Care. Arlene was born on May 22, 1923, in Franklin, Pennsylvania to Bert and Grace Bevington. She was the youngest of 3 children and the only girl in the family. After graduating from Franklin High School in 1941, she worked for JC Penny's and a family Dr. in town. In April of 1943, she married Paul Servey and they relocated to San Antonio, Texas in 1945. While in San Antonio, she worked at the hospital at Lackland Air Force Base, for Souhwesten Bell, for an ear, nose and throat doctor and even sold Avon door to door. While married to Paul, she gave birth to 3 daughters: Ruth, Mary and Betty, When Paul passed away in 1957, Arlene was left with 3 young daughters, but lots of help from family and friends. In 1959, Arlene married Gordon "Rocky" Tovey and in 1961 gave birth to a fourth daughter, Janet. In 1964, Rocky and Arlene made their home in Dallas, Texas (Lake Highlands). While in Dallas, Arlene and Rocky were actively involved in several churches, working with the youth and cooking Wednesday night dinners. At their senior living center, 5 Star Premier, they ministered to their fellow residents by starting a church that many attended. Arlene always had a love for children which she showed by babysitting for children in her home. taking in 2 foster children, Bob and Barbara and opening her own Mother's Day Out program called Wee Kare. She also loved taking care of her grandchildren and supposrting them in their many activites. Some of Arlene's favorite hobbies throught the years included knitting, crocheting, sewing and gardening. After Rocky retired, she traded some of those hobbies in for games of Chicken Foot, Mexican Train and Rummikub and traveling with the church friends. After Rocky's death in 2014, Arlene enjoyed her time at White Rock Court where she participated in many social games and activites. Althrough, Arlene will be missed by all of her family members, we are so thankful that she is finally home with Jesus where she has wanted to be for several years. Arlene was proceded in death by her parents, Herbert and Grace Bevington, her brothers, Roy Bevington and Herb Bevington, her first husband, Paul Sevy, her second husband Rocky Tovey and her grandson Bryan Watts. She is survived by her children, Ruth Cloninger and her husband Don of Garland, Texas. Mary Jensen and her husband, George of Garland, Texas. Betty Fambrough and her husband John of Breckenridge, Texas. Janet Williams and her husband John of Rowlwtt, Texas. Bob Davis of Waco, Texas. Barbara Dresser and her husband, Ken of Canada, Her 14 grand-children, and many, many great grandchildren and great-great grandchildren.

The family of Ms. Arlene Gwenn Tovey created this Life Tributes page to make it easy to share your memories.

Send flowers to the Tovey family.