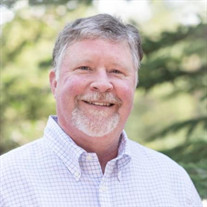 Bradley Lee Skaggs, age 57, passed away on February 20, 2022 in San Francisco surrounded in love by his parents, Frank and Sandra Skaggs and his sisters, Suzanne Skaggs Nelson and Meredith Skaggs Rocha-Jaje. Brad was born in Dallas, TX on December 20, 1964. He grew up in the Northwood Hills neighborhood in North Dallas, attending Northwood Hills Elementary, where he remained friends with many students and teachers. Brad loved youth sports, playing SVAA soccer, baseball and basketball, making life long friendships with coaches and teammates. Brad took many years of piano lessons, and played throughout his life for his own enjoyment and for the enjoyment of his family and students. Brad attended Northwood Junior High and graduated from Richardson High School in 1983. He was always active in Youth Group activities at First Baptist Church Richardson all through Junior High and High School. He sang in the Youth Choir and had leading roles in the High School Play. His love for running increased, propelling him into long distance running. He ran Cross Country and competed in the 1 Mile and the 2 Mile distance races, placing second in the Texas High School Track and Field Finals when he was a Senior. Brad was well known as being friendly and outgoing at RHS. He loved student politics, serving as the Student Council President his Senior year. Brad became a Baylor Bear, graduating in 1987. During his tenure at Baylor, he was part of several student ministries, helping those less fortunate in the Waco area. Frank and Sandra often found themselves exasperated that their son would give away the coat and bicycle that he had just received for Christmas. They soon learned to shop for coats and bicycles on sale. This led Brad to his experience as a missionary in Iceland. He lived in Reykjavik for 3 years, working with the youth at high risk for addiction in the primarily secular country before returning to Dallas. After several years in Corporate America, Brad felt called into teaching. He graduated from University of Texas at Dallas, teaching English in Richardson Public Schools for three years at JJ Pearce High School. It was during this time in his life that he was lured to the Pacific Northwest, dreaming of sunshine, mountains and an overall change of scenery. He taught 11th and 12th grade English, Economics and American Government at Rudsdale High School in Oakland, CA. The students at Rudsdale had great appreciation for all that Brad did at the school. He was a Step Team Sponsor, the Pep Rally Emcee and the Senior Awards Night Emcee on a regular basis. Brad always played the piano for the students, filling the halls with music and laughter. When Brad was not teaching his students, he was enjoying his friends singing Karaoke in famous China Town and attending San Francisco Giants games on a regular basis. Brad loved the Redwood forests and exploring the vast and beautiful city of San Francisco, creating several professional quality photography books of sites, flowers and city life. Although these are the facts of Brad’s life, it does little to describe his great humor, laughter, love for world travel, sports, music of all kinds and great food. His love of reading, social justice advocacy and debate are just more of the details that made Brad….Brad. It is hard to put into words the twinkle in Brad’s eye when he was amused and engaged in whatever you were saying, maybe a giggle and some witty banter would ensue. This is why we loved him and will miss him. Brad is survived by his parents, Frank and Sandra Skaggs, his sister Suzanne Skaggs Nelson, his brother in law, Jim Nelson and nephews Ryan, Charlie and Luke. He is also survived by his sister, Meredith Skaggs Rocha-Jaje, his brother in law, Francisco Rocha-Jaje and nephew, Lucas

Bradley Lee Skaggs, age 57, passed away on February 20, 2022 in San Francisco surrounded in love by his parents, Frank and Sandra Skaggs and his sisters, Suzanne Skaggs Nelson and Meredith Skaggs Rocha-Jaje. Brad was born in Dallas, TX on December... View Obituary & Service Information

The family of Bradley Lee Skaggs created this Life Tributes page to make it easy to share your memories.

Send flowers to the Skaggs family.