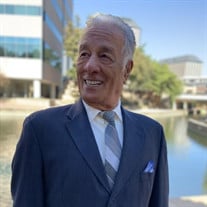 Gilbert A. Moreno, 85, passed away suddenly from heart complications on January 27, 2022. His loss was completely unexpected leaving family and friends shocked and deeply saddened. Our father will be truly missed by all his family and friends. Gilbert was born on July 28, 1936, in Dallas, Texas, to Antonio A. Moreno and Francis Antillon. He attended R.R. Crozier High School and received his GED from Dallas College in 1962. Gilbert enlisted in the United States Air Force in 1954, where he served as a radio repairman and was honorably discharged in 1956. Gilbert and his high school sweetheart, Mary Elizabeth Flores, were married on November 15, 1957, and after living in Dallas for a couple of years moved to Mesquite, Texas. The couple welcomed three children into their home: Becky, Andy, and Cathy. They were active and dedicated members of Oates Drive Baptist Church in Mesquite for many years and taught their children about God’s love, and the Word of the Lord. Gilbert loved to spend hours researching Bible scriptures, verse by verse and enjoyed attending his next-door-neighbors’ weekly Bible study to share his knowledge and to keep them on their toes. His children remember him as a kind, generous, great sense of humor, patient, and driven father who always encouraged them to pursue their goals with his straight-forward way of expressing his thoughts and suggestions. He began working at General Electric Supply in various warehouse positions and worked for several different industries throughout his career always offering advice on improving their work efforts, if, they did it his way! Dad had a natural talent for woodworking and loved to create pieces he would see from pictures or in a store. He was a dedicated coin collector and would look through your change for potential coins he could trade you for. He was generous, witty, and always had a smile or a joke to share. He was proud and passionate about his family. He loved spending time with his neighbors. He enjoyed meeting people, going into stores and always had a smile and a quick word with every new face he met. He leaves a huge hole in the hearts of his family and friends who were always entertained by his stories and hilarious sense of humor. He truly brought the life to the party. Gilbert was preceded in death by his beloved wife of 45 years Elizabeth Moreno, his daughter Catherine Schuetz-Walker and granddaughter Celina Schuetz. He is survived by his daughter Becky Banks, son/daughter-in-law Andrew and Tahsha Moreno, and grandsons, James, Eric, Anthony, Aaron, Matthew, Ryan, and nine (9) great-grandchildren. He is survived by his brothers David Moreno, Antonio Moreno, Jr. and Carlos Moreno with numerous nieces, nephews, and friends who were his extended family. The viewing is scheduled for Monday, February 21, 2022, from 3:00 – 5:00 pm and the funeral to follow on Tuesday, February 22, 2022, at 10:00 am at Restland Funeral Home & Cemetery, 13005 Greenville Ave, Dallas, Tx 75243 All are welcome to attend and celebrate Gilbert’s life. Condolences can be sent to [email protected] or [email protected] Funeral arrangements for Gilbert Antillon Moreno have been faithfully entrusted to Restland Funeral Home and Cemetery, which is located at 13005 Greenville Ave., at the intersection of Restland Road, Dallas, Texas 75243, and can be reached at (972) 238-7111.

Gilbert A. Moreno, 85, passed away suddenly from heart complications on January 27, 2022. His loss was completely unexpected leaving family and friends shocked and deeply saddened. Our father will be truly missed by all his family and friends. Gilbert... View Obituary & Service Information

The family of Gilbert Antillon Moreno created this Life Tributes page to make it easy to share your memories.

Gilbert A. Moreno, 85, passed away suddenly from heart complications...

Send flowers to the Moreno family.