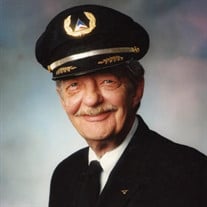 "To fly west, my friend, is a flight we all must take for a final check" Larry J. Farris took that flight west on February 16, following a brief battle with congestive heart failure and a broken hip. A lifelong aviator, he passed away peacefully spending his final days surrounded by his loving family. A proud Texan he was born on January 10, 1937, in Sweetwater, Texas to Lanell and Morris Wilson Farris. He grew up in Dallas and graduated from Woodrow Wilson High School. He attended North Texas State University. Aviation became his passion at an early age, learning to fly at White Rock Airport, he flew airplanes before he could drive a car. Together with his stepfather, John H. Huett, he taught flying at Texas A&M University in the 1960's. He served his country in the Air Force reserve, but when he was hired by Delta, he was one of the few civilian pilots. His career with Delta spanned 34 years, flying most of the aircraft in the Delta fleet, and retired on the Boeing 757/767. In addition to his career with Delta, he served the aviation profession in the field of Dangerous Good/Hazardous Materials - which involved what could safely be transported on commercial aircraft. He served as Chairman of the Airline Pilots (ALPA) Hazardous Materials Committee and went on to become Chairman of the International Federation of Airline Pilots (IFALPA) Hazardous Materials Committee. By the time he retired, Captain Larry Farris, was recognized as one of the foremost experts on the subject within the international aviation community. He was awarded the prestigious Scroll of Merit in recognition of his contributions. After retirement and a lifetime of travel, he enjoyed spending time in Colorado with family and friends. He was an avid outdoorsman and enjoyed hunting, sports and dogs. He loved his tri shelties - all named Lucky. At the time of his passing, he was up to Lucky IV. Larry was a longtime member of the Park Cities Baptist Church. He was predeceased by his father and stepmother Morris W. and Trudie Farris; mother and stepfather Lanell and John H. Huett. Survivors include his loving wife of 47 years, Karen and children Mark Farris (Cyndi), Angie Wilkins (Brent) and Tracey Farris (Jimmy Wroblski), granddaughter Kim Lee (Nathan) and great grandchildren Jessica and Garrett. He was also a special uncle to Keith Little and Shannon Edwards. A Celebration of Life service will be held on March 11th at Park Cities Baptist Church in Ellis Chapel, Dr. Jack Martin officiating. A family visitation will follow the service. If desired, in lieu of flowers, donations may be made to Park Cities Baptist Church, 3933 Northwest Parkway, Dallas, TX 75225 - or to a charity of your choice.

"To fly west, my friend, is a flight we all must take for a final check" Larry J. Farris took that flight west on February 16, following a brief battle with congestive heart failure and a broken hip. A lifelong aviator, he passed away peacefully... View Obituary & Service Information

The family of Larry J. Farris created this Life Tributes page to make it easy to share your memories.

&quot;To fly west, my friend, is a flight we all must take for a final...

Send flowers to the Farris family.