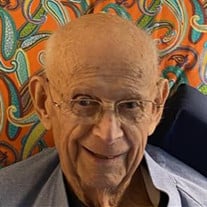 LEE DEAN RUSSELL 1928 - 2022 Dean, age 93, was born April 24, 1928 to Neva Robinson Russell and Felix Leslie Russell, and passed away peacefully at home on January 22, 2022. At age 12, he and his mother moved from Vernon, TX to Dallas. He attended J. L. Long Junior High School, graduated from North Dallas High School, and attended the University of Texas Austin. Dean served with the Thunderbirds, 45th Recon., U. S. Army in Korea from 1950 -1952 and for many years traveled to Claremore, OK for reunions with friends made while in the service. While working in the Dallas Cotton Exchange for cotton merchant W. D. Felder, he met and married his wife of over 65 years, Mary Patricia McNeil (Pat), in 1956. They had two children, Matthew Lee and Leslie June. He and Pat were members of the SCCA (Sports Car Club of America) and participated in countless North Texas events, including gymkhanas and rallies, in his 1958 Austin Healey. Years later, the family spent weekends at local motocross tracks cheering on his son and friends. Dean also "schooled" them in the fine art of bowling and pool. He supported his daughter by attending her ballet recitals and drill team performances. After retiring from 37 years with Centennial Liquor stores, he spent his spare time re-designing the backyard and developed a penchant for good food and drink. When heart problems put him in cardiac rehab, he spent most mornings with new friends at Ewing Cardio-Vascular Center for 15 years, until COVID-19 shut us all down. Survivors include wife Pat, daughter June and husband Mike Guy, granddaughter Kelsey and husband Jonathan Rudd, grandson Spencer Guy and wife Emily, great grandchildren Russell and Evelyn, sisters-in-law Linda McNeil and Jean Russell, as well as their families, and niece Kim and her husband Dale Springfield. Dean is predeceased by his son Matthew, his parents, his brother Bates, brother-in-law Robert McNeil, nephew John McNeil, and niece Suzanne Morford. If you choose, please make any memorials to the charity of your choice in Dean's honor. Services will be held Tuesday, February 22, 2022 at 2:00pm at Restland Funeral Home, 13005 Greenville Avenue, Dallas, TX 75243 and can be reached at (972) 238-7111.

The family of Lee Dean Russell created this Life Tributes page to make it easy to share your memories.

Send flowers to the Russell family.