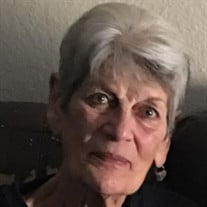 Mary Jo Jones passed away at age 81 on March 31, 2020. Mary Jo was born on November 19, 1938 in Houston, Texas to parents Richard Joseph and Pearl Ella Perkin. She graduated from Dallas Adamson High School, where she was quite the athlete playing tennis, volleyball and basketball. Mary jo also attended modeling school while in high school. In 1957 Mary Jo and her loving husband Bill were married in Dallas. They made their home in Mesquite and raised their family there. In 1983 Mary Jo started A Professional Associates, a bookkeeping service for independent insurance agencies, and she operated her company until 1987 when she went to work as the full time bookkeeper and office manager for TEI Insurance Agency, Inc. and continued to work there until retirement. She was a member of St. Marks United Methodist Church in Mesquite. Mary Jo was blessed with beauty, and attended modeling school while she was still in high school. She won a number of beauty pageants including the title of Miss Flame in the Miss Flame Beauty Pageant sponsored by the Dallas Fire Department Firefighters Association. Mary Jo also won the crown of Miss Oak Cliff and the crown of Miss Soaring in the U S Naval Base Pageant in Grand Prairie. She was also quite an accomplished dancer, and taught ballet tap and toe dance for girls ages 3 through high school. She was also almost a movie star, appearing in the Elvis Presley movie Rock Baby Rock as a dancer, but the movie never made it to the box office. Mary Jo and Bill enjoyed going to the casinos to play the “slots”. They also enjoyed the horse races, and they spend many of their wedding anniversaries at the Hot Springs race track with their friends and with their family. Mary Jo loved to cook and loved to entertain her family. Every Christmas, every Thanksgiving, and any other occasion that she could come up with, Mary Jo would have all of her family including especially the children and grandchildren, over to her house where she would cook for the whole bunch and have a fun family get together. Mary Jo was affectionately nicknamed Sugar by her husband Bill and the other grownups, and nicknamed Mamaw by all of the kids. Mary Jo was preceded in death by her parents Richard and Pearl, her sister Margie Moore and by her brother Jack Perkin. She is survived by her husband Bill; brother Rick Perkin and his wife Patty; daughter Susan Pool and husband Mike, son Bodie Jones; grandchildren Bret Jones and his wife Andrea, Nick Kirby and his wife Patty, Renae Stolly and her husband Jason, Dacey Gonzalez, Cheyene Bodie Jones and his wife Stephanie, Chelsie Weems and her husband Ben, and Ryan Jones and his wife Emily; great grandchildren Mikayla, Bret Jr., Noah , Mariah, Renee, Jayden, Brendon, Jack, Joey, Izzie, Jael, Kenleigh, Skylin, London, and Logan, a great great grandson Azael, and a large number of loving nieces and nephews. The family has requested a private burial at Restland Cemetery.

Mary Jo Jones passed away at age 81 on March 31, 2020. Mary Jo was born on November 19, 1938 in Houston, Texas to parents Richard Joseph and Pearl Ella Perkin. She graduated from Dallas Adamson High School, where she was quite the athlete playing... View Obituary & Service Information

The family of Mary Jo Jones created this Life Tributes page to make it easy to share your memories.

Send flowers to the Jones family.