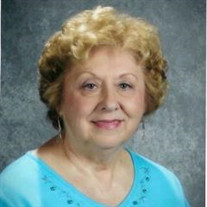 Nancy C. Motsinger was born in Fulton, Kentucky to Duke Biggs Crews and Bonnell Jinkins Crews on February 27, 1941. Nancy is survived by her husband H.M. Motsinger, daughter, Donna Motsinger Scott, and son, Charles Duke Motsinger and his wife Marney and granddaughters, Ailysh, Taylor, and Charli Motsinger. Also living are her cousins, Joan Dollar and her husband, Bill, Janet Pearson and her husband, Sam, Dan Pratt and his wife, Beverly, and Pat Lowe of Florida. She was married to H.M. Motsinger on June 29, 1963 and remained married until her death. Nancy was a teacher for over 30 years and taught at Bryan Adams High School in Dallas, Texas at Dallas Christian High School in Mesquite, Texas, and West Mesquite High School in Mesquite, Texas. As teaching was her passion, she returned to teaching even after her retirement in 2009. She enjoyed the interaction with students and the ability to contribute to their success in life. She frequently heard from former students who would tell her what a great impact she had made in their further studies and the humorous stories they remembered from her classroom. Her dedication to her work resulted in the induction into Apple Corps in 1997 and served as the head of the Science department for several years. In retirement, she cared for her mother and enjoyed spending time watching her granddaughters grow into beautiful young women. For several years she taught Bible school to 2 and 3yr olds alongside her dear friend Mary Lois Meggs at Skillman Avenue Church of Christ. In her later years she attended Saturn Road Church of Christ and when she could no longer physically attend, she attended virtually up until her death. A private commemorative reception will be held on Saturday, April 23, 2022 to honor her life. Nancy will then be laid to rest near her parents in the Abbey Mausoleum at Restland Memorial Park in Dallas, Texas.

The family of Nancy C. Motsinger created this Life Tributes page to make it easy to share your memories.

Send flowers to the Motsinger family.