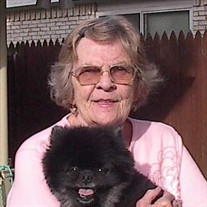 Nannette Pietrykowski Watson, age 89 of Dallas, passed away on Wednesday, March 30, 2022 at Faith Presbyterian Hospice in Dallas, TX. She was born on March 11, 1933 to Chester and Anna Pietrykowski in Detroit Michigan. She was proudly from Detroit, and fondly remembered how Detroit was "The Arsenal of Democracy'' during World War II. Nannette received her BA from Wayne State University, then her Master of Education from Penn State University in 1957. She taught at an elementary school in State College, PA. Nannette married Robert Watson in 1953. They were married for 58 years. Bob and Nannette moved every few years but settled in the Lake Highlands area of Dallas in 1975 where Nannette did substitute teaching all over the Dallas area and was enthusiastic about teaching any subject needed. Nannette and Bob enjoyed many years vacationing in the Florida Keys where they would enjoy fishing, swimming and fish dinners. Nannette is survived by her daughter, Diana Watson-Peine, and her husband Bob Peine, her daughter Karen Watson, brother Jerome Peters, his daughters Michelle and Nicole and their families, brother Robert Pietrykowski and his wife Tina, and their children, Lisa, Jason and their families, brother Bernard's children Kathy, Chester, Tony, Ann Marie, as well as by brother Dennis Pietrykowski. Nannette was preceded in death by her parents Chester and Anna Pietrykowski, husband Robert Watson, brother Bernard Pietrykowski and sister-in-law Terri Peters. There will be a Visitation and Rosary said for Nannette on Wednesday, April 20, 2022 at 12:30 pm directly followed by the service at 2:00 pm at the Wildwood Chapel at Restland Funeral Home and Cemetery, Dallas TX. Nannette will be remembered for her kindness, patience and love of learning and will be deeply missed by all. She liked to work on the New York Times Crossword puzzles and research the answers. For charities, Nannette liked to remember the veterans, charities like AmVets, and DAV (Disabled American Veterans). She also liked to support education, like Penn State University, the School of Education and Wayne State University. Services for Nannette will be held at the Wildwood Chapel at Restland Memorial Park on Wednesday, April 20, at 2pm. Her Visitation will be on the same day at Restland Funeral Home from 12:30 - 1:30pm. Funeral arrangements for Ms. Nannette Watson have been faithfully entrusted to Restland Funeral Home and Cemetery, which is located at 13005 Greenville Ave., at the intersection of Restland Road, Dallas, Texas 75243, and can be reached at (972) 238-7111.

Nannette Pietrykowski Watson, age 89 of Dallas, passed away on Wednesday, March 30, 2022 at Faith Presbyterian Hospice in Dallas, TX. She was born on March 11, 1933 to Chester and Anna Pietrykowski in Detroit Michigan. She was proudly from... View Obituary & Service Information

The family of Nannette Pietrykowski Watson created this Life Tributes page to make it easy to share your memories.

Nannette Pietrykowski Watson, age 89 of Dallas, passed away on...

Send flowers to the Watson family.