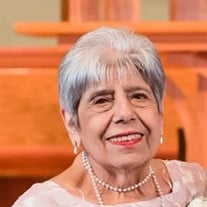 Peggy Montgomery of Garland, TX born on April 6th, 1941 in Dallas, TX to Peter and Marion Joseph passed away on April 22nd 2022. Peggy was a deeply religious, gracious woman who held true to her faith and the beliefs of the Catholic Church. She devoted herself to the Lord, family and friends. She will always be remembered for her beautiful smile, quit whit and her willingness to help others. Peggy was a founding member of St. Joseph’s Catholic Church in Richardson, TX and attended weekly mass until the onset of the virus but continued her weekly worship through television services. Peggy was a member of St. Joseph for over 50 years. Peggy attended Ursuline Academy in Dallas and later earned an Associate’s Degree in Business Administration. She spent over 30 years working at SMU in the Communications Department and helped countless Communication majors navigate through the administration process during her tenure. She retired in 2004. Peggy kept very busy in retirement by remaining in constant contact with her children, grandchildren, family and friends. She was actively engaged in all her grandchildren’s activities; from scouting events to drill team reviews to football games to wrestling matches and beyond, “Nomi” was there! She was a huge sports fan (Ponies and Cowboys), a fantastic cook (her oven baked brisket was out of this world), enjoyed her NCIS shows and loved craft shows and shopping for misc. trinkets. She had a quick wit and if you dished it out, you sure better be able to take it, because she could and would! She absolutely loved holidays, especially Christmas. Her authentic Christmas Eve Lebanese feast was incredible and although it will never be the same, the tradition will carry on! She was a wonderful mom and consummate grandmother. Her family was her life. There will never be another one like you, Nomi! Thank you for being in our lives! Preceded in death by brothers Pete Joseph, Eddie Joseph and granddaughter Katie Montgomery. She is survived by her children, Randy (Vickie) Montgomery of Richardson, TX, Rick (Denise) Montgomery of Richardson, TX and Kathi (David) Bryan of Allen, TX. Grandchildren include Jennifer Montgomery, Alison (Edgar) Esparza, Nick Montgomery, Ben Montgomery, Matthew Bryan and Patrick Bryan. Honorary pallbearers include Nick Montgomery, Ben Montgomery, Matthew Bryan and Patrick Bryan. A rosary will be recited at 6:30 pm on Wednesday, April 27th followed by Visitation from 7:00 pm to 8:00 pm at Restland Funeral Home in Dallas, TX. A Funeral Mass will be celebrated at 10:30 am, Thursday April 28th at St. Joseph Catholic Church in Richardson, TX. There will be no graveside service.

Peggy Montgomery of Garland, TX born on April 6th, 1941 in Dallas, TX to Peter and Marion Joseph passed away on April 22nd 2022. Peggy was a deeply religious, gracious woman who held true to her faith and the beliefs of the Catholic Church.... View Obituary & Service Information

The family of Peggy Ann Montgomery created this Life Tributes page to make it easy to share your memories.

Send flowers to the Montgomery family.