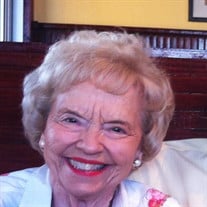 Ruby Re Corn Jackson, born during The Great Depression in Elk City, OK, on May 31, 1932, was a champion for the underdog and downtrodden. Married to Edwin L. Jackson for 68 years, she was devoted to her family, friends, and her faith. She leaves behind her husband, Ed; her two daughters: Liz Frame and husband Ed; and Elaine Lowen and husband David; daughter-in-law Janet Patterson Jackson; grandchildren Emilee & Charles Leftwich, Elise & Andrew Raymund, Shelby Jackson, Jackson Lowen, and Allie Jackson; and great-grandsons Caden, Owen, and Judson Leftwich. Her son, Gene Jackson, preceded her in death last year. Re grew up in Oklahoma City and graduated from Capitol Hill High School, then attended the University of Oklahoma in Norman, OK, where she met her future husband at the Baptist Student Union. They married the day before Ed's commission into the US Navy, and they moved to San Diego, CA, for several years. Missing the Texas-Oklahoma area, they moved back and settled in Garland, TX, in 1962. Re completed her university degree at Texas Women's University in 1974 and served as a substitute teacher in many elementary schools in the Garland area. Re's heart for ministry led her to serve in many capacities through First Baptist Church Garland, where she taught Sunday school, led in Vacation Bible Schools and women's ministries, and played the piano for children's choirs. She and Ed served on the church's marriage counseling program, "It Takes Three" 22 different times, and led 30 parenting programs through the after-care Exodus prison ministry. She participated in the Bill Glass Bible study ministry to prisoners in the Dallas area; she led Masterlife classes in the Michael unit at Tennessee Colony prison and led a ministry through Write Way Ministry, a Garland-based Bible correspondence course. But perhaps her greatest ministry started with her service as a FOCAS volunteer (now known as CASA: Court-Appointed Special Advocate). Her impact on the lives of foster children within the court system was immeasurable, and her example led to other family members to becoming foster parents and CASA volunteers themselves. One of Re's final ministry was in prayer for the children she saw on "Wednesday's Child," a local television program on Channel 8. Re never lost her smile, even near the end. She survived cancer twice, two major back surgeries and hip replacement, as well as a subdural hematoma from a fall, before succumbing to dementia. Her family thanks her personal caregivers Valdo and Raquel, Anchor of Hope hospice nurse Yeshe and caregiver Myra. A private family service will be held at Restland, and the family will hold a celebration of Re's life in the spring at a later date.

Ruby Re Corn Jackson, born during The Great Depression in Elk City, OK, on May 31, 1932, was a champion for the underdog and downtrodden. Married to Edwin L. Jackson for 68 years, she was devoted to her family, friends, and her faith. She leaves... View Obituary & Service Information

The family of Re Corn Jackson created this Life Tributes page to make it easy to share your memories.

Ruby Re Corn Jackson, born during The Great Depression in Elk...

Send flowers to the Jackson family.