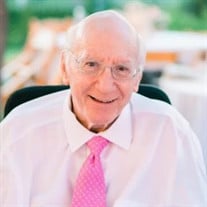 On Saturday, November 27, 2021, Jesus called Roy Need McGown to his eternal home. He is survived by his wife, Diane, stepdaughters Kim and Cheryl, son-in-law, John Meador, granddaughters Montana Meador, Mackenzie Wilhide, Morgan Smith, and Mason Jolesch and their husbands, Brandon, Scott, and Austin, and their children Ford, Owen and Parker Grace, brother-in-law Randy Recer, along with many nieces and nephews. His granddaughters affectionately called him PePaw. Roy loved God, his wife Diane, family, friends, bowling, golf, playing pool, the Dallas Cowboys, the Texas Rangers, music, and dancing with his wife. Let there be no doubt, he loved with his whole heart in everything he did throughout his 80 years of life. He always made time for his family and friends and never missed an event. He was kind, soft spoken, forgiving, and full of wit. Roy’s one liners were infamous, but one has stood the test of time. To break the tension of a spirited conversation he would say out of nowhere “I wonder if the Rangers won” regardless if it was baseball season or not. This saying continues in the family today even though it has been decades since he first spoke those words. Roy grew up in Oak Cliff and approached life with humor and had many friends growing up who remained life-long friends, including his stepdaughters’ late father J.D. Davis, who Roy affectionately called his husband-in-law. Roy was always up for an adventure, spur-of-the-moment fun, and helping those in need including giving random strangers a ride. In the late 1960’s one of the random strangers was no other than Jerry Jeff Walker. In thanks for the ride, Jerry Jeff played a song he had recently written, “Mr. Bojangles,” which soon became a big hit when recorded by the Nitty Gritty Dirt Band in 1971. Roy was a Lifetime Master Mason, Oak Cliff No. 705, Grand Lodge of Texas for 50 plus years and played on their Shriner’s bowling league, where he met and played with his wife Diane’s late mother and father Teresa and Weldon Recer. It was through bowling with his wife Diane’s parents that he and his wife Diane fell in love and married on June 22, 1975. Roy’s stepdaughters were teenagers when he married his wife Diane. He never backed away from providing them the structure and discipline required for them to become responsible and caring adults. He protected them as they were his own and put many of their dates through the wringer with impromptu late-night pool games so he could assess if they were worthy of his stepdaughters’ love. The Shriners bowling league was only one of the bowling leagues Roy played on, often bowling several times a week. He kept multiple bowling balls in his trunk that were customized for him and the different lane types and oil patterns that he may encounter. To those not familiar with his bowling skills this seemed over the top, but once they saw him play, they understood. He often scored a perfect game and qualified as a long-time member of the Professional Bowlers League. Roy was an avid listener and caller into the sports radio program “The Ticket.” He would participate in their bowling tournaments and given his resemblance to the “Curb Your Enthusiasm” actor he soon became known as “the fake Larry David”. His moniker stuck and became his call-in name. It was not uncommon when people heard this story they would remark “I heard him on the radio!” In 2011, shortly after Roy retired, he suffered a tragic accident while helping a friend trim trees. The accident changed his and his wife Diane’s lives forever and left him wheelchair bound. Yet he approached each day with determination, grace and never complained. He always had a smile and a positive attitude and never wanted anyone to feel sorry for him. Roy would say “I get through each day because of Jesus.” Jesus was the cornerstone of his courage and strength. All who knew Roy watched him live gracefully with his physical limitations and how to be strong in faith and mind. He never gave up and lived each day with a smile. His stepdaughters Kim and Cheryl witnessed how his accident brought him and their mother Diane closer together in their faith and love for one another. While Roy is no longer with us, he remains in our hearts forever; for he is in the presence of our mighty Savior Jesus Christ and someday we will meet again. Until then let his life to be a reminder to us how to live without fear, and with courage and a smile upon our face. The family is extremely grateful for Tina Lee who cared for Roy for the last seven months of his life. Tina arrived every morning and night with a big smile and even if Roy hadn’t spoken all day, he would recognize her and call her by her name. Tina cared for Roy as if he was her father and provided invaluable support to his wife Diane, and stepdaughters Kim and Cheryl. Tina will always have a special place in the hearts of those that came to know her through her daily visits with Roy. Services will be held on Monday, December 6, 2021 at 10:00 a.m. at the Lake Highlands Presbyterian Church located at 8525 Audelia Road, Dallas, Texas 75238. Roy’s memorial service will be streamed live at https://www.lhpres.org/ for those unable to attend in person. Due to COVID-19, Lake Highlands Presbyterian Church respectfully requests masks be worn in the sanctuary. Funeral arrangements for Mr. Roy Need McGown have been faithfully entrusted to Restland Funeral Home and Cemetery, which is located at 13005 Greenville Ave., at the intersection of Restland Road, Dallas, Texas 75243, and can be reached at (972) 238-7111.

The family of Roy Need McGown created this Life Tributes page to make it easy to share your memories.

Send flowers to the McGown family.