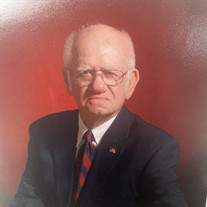 Sam Daniel Griggs, age 90, passed away peacefully while listening to hymns and surrounded by family who loved him on Wednesday, February 16, 2022, in Dallas, Texas. He was born to Charles Nathan Griggs and Vivian Easterling on Wednesday, August 5, 1931, born in Houston but raised in Dallas. He attended Forest Avenue High School, Arlington College, and Southern Methodist University. Sam proudly served in the Army as a Radar Equipment Foreman in the Artillery Division and was passionate about displaying and waving our red, white, and blue. He later enjoyed a career in Dallas and Las Vegas, Nevada in the Hospitality business. Some of his favorite activities were attending church, Senior Bible Studies, and singing old gospel hymns. He was an enthusiastic member of the Bridge community for many years and enjoyed the opportunity to travel to tournaments with friends. Until his final days he was an avid SMU football fan and had the privilege of watching SMU beat University of North Texas on the SMU campus this past September. Sam was preceded in death by his mother and father, Charles N. Griggs and Vivian Easterling Griggs of Trenton, Texas and Brother CN Griggs “Smokey” of Abilene. He is survived by his brother, Orris H. Griggs “Homer” and wife Carole of Dublin, Texas and brother William Shannon Griggs and wife Bonnie of Richardson, Texas. He is also survived by many nieces and nephews, great-nieces and great- nephews and several cousins that loved him dearly. He will be sincerely missed by his loving family, devoted friends, and all the wonderful individuals who knew and loved him. Funeral arrangements for Sam Daniel Griggs have been faithfully entrusted to Restland Funeral Home and Cemetery, which is located at 13005 Greenville Ave., at the intersection of Restland Road, Dallas, Texas 75243, and can be reached at (972) 238-7111.

Sam Daniel Griggs, age 90, passed away peacefully while listening to hymns and surrounded by family who loved him on Wednesday, February 16, 2022, in Dallas, Texas. He was born to Charles Nathan Griggs and Vivian Easterling on Wednesday, August... View Obituary & Service Information

The family of Sam Daniel Griggs created this Life Tributes page to make it easy to share your memories.

Send flowers to the Griggs family.