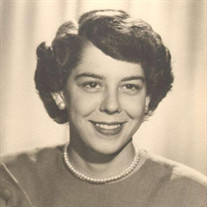 Ginger (Shane) Hartman, wife, mother and teacher passed away at the age of 91 years on May 5, 2022 surrounded by her family after a sudden but brief struggle with congestive heart failure. Ginger will be lovingly remembered and missed by her children, Shane Hartman and wife Kathy Svoboda, Tim Hartman and wife Maria Hartman, Malinda Hartman Kocks and husband Jack Kocks, Lisa Hartman Corrigan and husband Jess Corrigan, her grandchildren Sarah Kocks Hoffman and husband Michael Hoffman, Jared Kocks and fiancé Jodi Corbin, Jonathan and Frank Hartman and her great-grandchildren Hadley, Hunter and Holland Hoffman. She was preceded in death by her husband, Ken Hartman and their youngest daughter, Patricia Hartman. Ginger was born in Houston, Texas; a sixth generation Texan with ancestors that resided in Stephen F. Austin’s first Texas colony. Her family moved to Galveston, Texas and Brenham, Texas before settling in Dallas, Texas in 1947. She graduated from Woodrow Wilson High School, where she was a member of the Dallas Historical Society, Little Theater, Pan American Student Forum, All-City Pan American Club, Press Club and the National Honor Society. She went on to earn a Bachelor of Arts degree at Southern Methodist University where she was a member of the Alpha Xi chapter of the Gamma Phi Beta sorority. Ginger married Ken Hartman in 1953 and moved to Houston, Texas where her first three children were born. The young family moved to Dallas, Texas in 1959 where her fourth and fifth children were born and all five children were reared there. Ginger’s love of literature, arts and the Spanish language, in which she was fluent, led her to pursue a career in teaching. Her compassion for less fortunate and challenged children was expressed by teaching English as a Second Language and specialized classes for Children with Special Needs. An energetic and creative woman, Ginger was constantly juggling many projects which included genealogical research, her garden, home improvements and event planning (especially family vacations and holidays). She was an active member of her community and her church, participating in Bridge Parties, Church Social Functions, the Garden Club, Bible Study and Reading Groups. Ginger loved the outdoors and, like her husband and mother, enjoyed fishing, camping and traveling with her children. As a young mother of five she became a wonderful cook and baker. She curated recipes during all stages of her life and thoroughly enjoyed the adventure of them. From her mother she learned how to sew and she crafted Easter outfits, prom dresses, bridesmaid’s dresses and even her own wardrobe. Her home was decorated with draperies, pillows, bedspreads and originally designed carpets all handcrafted by her with much attention to color and detail. Her love of flowers was evidenced by her botanical knowledge along with her private garden landscaping and her amazing flower arrangements designed from something as simple as a single bud or a multitude of blooms. She was an avid reader of many subjects including religion, plants, food, historical fiction and looked forward to the newspaper on a daily basis. Ginger was a lifelong member of the East Dallas Christian Church where she met her husband; her strong faith in God sustained her throughout her life and her faith was shared in person and in daily prayer. Please join the family for visitation on Friday evening, May 13th from 4-7pm with a celebration service of her life on Saturday morning, May 14th at 10:00am in the Wildwood Chapel at Restland with graveside service and reception to follow. In lieu of flowers, the family asks that you send donations to the East Dallas Christian Church; visit: edcc.org; click on Ginger Hartman Memorial Fund. Ginger will be interred at Restland Memorial Park to rest with her daughter, husband, father Bert Shane and mother Elizabeth Shane.

Ginger (Shane) Hartman, wife, mother and teacher passed away at the age of 91 years on May 5, 2022 surrounded by her family after a sudden but brief struggle with congestive heart failure. Ginger will be lovingly remembered and missed by her... View Obituary & Service Information

The family of Virginia (Ginger) Lee Hartman created this Life Tributes page to make it easy to share your memories.

Send flowers to the Hartman family.