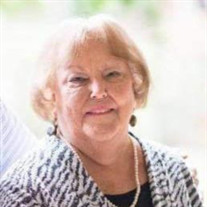 Virginia Fox Whitten of Heath, Texas passed away on April 3, 2022 at the age of 84. Virginia was the cherished wife of James Whitten and mother of daughter Teresa Folz and sons Jim and Chris Whitten. She was the beloved mother-in-law of Gil Folz, Patricia Gonzalez and Sheree Lovejoy. Her love for grand-daughters Brittany and Courtney Whitten, Valerie Winsor and great-grandchildren Addyson and Burk Wald, was immense. She adored her pet Bichon "Pumpkin", her second daughter, for the past 13 years. Her extended Fox and Whitten family in Texas, Tennessee, Oregon, Colorado and Oklahoma were much loved. Best friends Mary Lou Jones, whom she met at age 13, and Carolyn Summers were sisters to her. Virginia volunteered at Scottish Rite Hospital for several years and was co-owner and manager of Delmann's Feminine Fashions in University Park and later in Garland. Virginia's life was multi-faceted. She was very much a social person who enjoyed interaction with locals during her extensive travels with husband James. They considered the staff at the Ka'anapali Beach Hotel in Maui, where they visited yearly for 25 years, as a second family. For years they met special friends Maurita Paprocki and George Nelson of New York at Ka'anapali. International travel destinations included British Columbia, Alberta, Ontario, Nova Scotia, Prince Edward Island, New Brunswick, New Zealand, Australia, Mexico, Bali, Singapore, Hong Kong, Tahiti, Moorea, Bora Bora, the U.K., Ireland, Western Europe and various Caribbean Islands. While at their vacation home in Hot Springs Village, Arkansas Virginia developed a love for lawn bowling. Along with snorkeling in Hawaii, they became must activities. Virginia moved from Garland, where she lived for 44 years, to Rockwall County in 2003. She made many new friends and began much-loved activities at the Rockwall Senior Center. She especially enjoyed the Monday and Wednesday bingo sessions. The staff became family to her. She also looked forward to after-bingo dinner with George and Carolyn Stovall. Monthly dinners with her husband and his 20 plus years golfing foursome and their wives - Chet and Jeanine Young, Paul and Gerry McCaffrey, and John and Jewel Ray - were special. She moved to Buffalo Creek in Heath in 2008. She loved the neighborhood greatly and valued the kindness and welcoming attitude of her neighbors. A special activity was the bi-weekly dinners with neighbors and valued friends Roz and Roger Tranberg. Virginia was in dialysis treatment her last 6 years. Thanks go to the Davita Rockwall staff for their attentive care. Virginia's final days were spent at the Broadmoor Medical Lodge where the staff were extra-ordinarily kind and helpful in her care. Virginia's family wishes to thank Dr. Chris Clark and Karen Polzer of Baylor Scott & White for their guidance in her final days. It was a great comfort to us all.

Virginia Fox Whitten of Heath, Texas passed away on April 3, 2022 at the age of 84. Virginia was the cherished wife of James Whitten and mother of daughter Teresa Folz and sons Jim and Chris Whitten. She was the beloved mother-in-law of Gil... View Obituary & Service Information

The family of Virginia Fox Whitten created this Life Tributes page to make it easy to share your memories.

Virginia Fox Whitten of Heath, Texas passed away on April 3,...

Send flowers to the Whitten family.